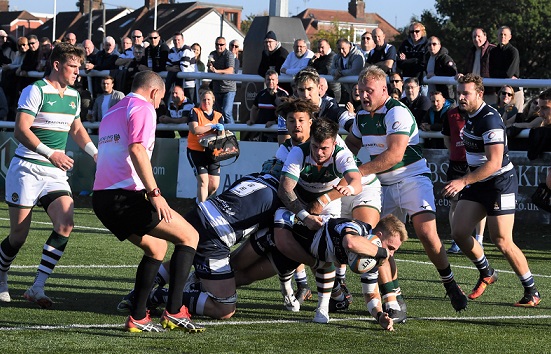 Coventry left Ealing Trailfinders with a try bonus-point earned through a battling second half display which was full of character.

However, they were also left to reflect on a 60-25 nine-try defeat at the hands of the table-topping hosts who sprinted to a 38-8 lead at the half-hour mark.

Full back Peter Lydon finished with 20 points for Ealing, while Max Trimble crossed twice and Tony Fenner and Heath Stevens claimed a score apiece for the visitors.

Coventry got off to the worst possible start as the home side claimed the opening score after only two minutes of action.

Ealing launched their back-row at the visitors’ midfield, then centre Pat Howard took the offload from Kieran Murphy and raced over from 25 metres for a try which Lydon converted.

Cov got on the board direct from the restart, when Ealing were penalised on the ground and Jake Sharp kicked a simple penalty.

However, Rowland Winter’s team were then hit by a two-try salvo in as many minutes.

The first was touched down by hooker Alun Walker who was shunted over from a five-metre attacking lineout, after which home fly half Craig Willis picked off a pass on his own 22 and released Howard to sprint 65 metres to the Cov line.

The visitors then went close to claiming a try when Pete White narrowly failed to touch down a chip ahead, but did soon cross the home line through Tony Fenner, who twisted over after a good spell of continuity.

This left the hosts holding an 11-point advantage at the end of the opening quarter, but any hopes of a comeback were quickly dispelled when Ealing claimed three further tries before the half-hour mark.

The first was finished by winger Segundo Tuculet after Trimble missed an attempted interception. He was followed over the line by Rayn Smid then James Cordy Redden as the hosts took full advantage of their powerful ball-carriers, among whom flanker Jordy Reid was prominent.

Lydon added two further conversions, and he also kicked a penalty shortly after Trimble added a second try for Cov which followed a solid scrum and a nice pass from Junior Bulumakau, who had replaced Fenner.

This left Ealing with a 41-13 half-time advantage, but the visitors started the second period brightly and received a boost when Tuculet was sent to the sin bin for deliberate offside.

However, it was Ealing that claimed the next score through full back Lydon, who was on the end of a long spell of continuity.

Hopes of an away bonus point were raised when some accurate handling sent Trimble speeding to the corner shortly before the end of the third quarter.

However, after Heath Stevens was sent to the sinbin for an early tackle on his own line, Ealing’s pack promptly drove Reid over for a try which Lydon converted.

Cov pressed hard for a try bonus point as the game enters the closing ten minutes, and Scott Tolmie then George Oram, who was outstanding all afternoon, went close following a lineout drive.

However, the all-important fourth score did soon arrive, finished by Stevens after a nice half-break from Sharp, who also added the conversion.

But it was Ealing who had the last word through replacement Ollie Stedman, who barged over from close range via a quickly-tapped penalty, for a try which Lydon upgraded.