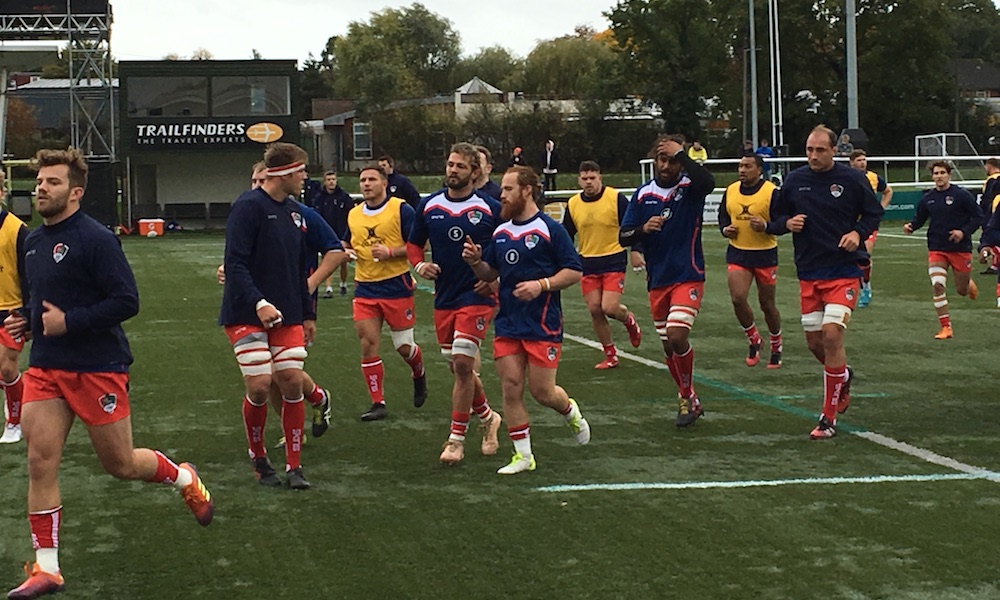 Honours were shared at Trailfinders Sports Ground in a humdinger of a contest which maintained Coventry Rugby’s place as one of the challengers at the top of the Championship table.

With the teams heading home with three points apiece there was disappointment among both camps, but given the way that the visitors fought back from 14 points down in the final quarter to tie things up it was the Coventry faithful who had the brighter mood in the bar post-match.

Coventry had the strong wind at their backs in the first half, but it did not take long for them to be on the back foot. Playing with an advantage Ealing put the ball through the hands from halfway, and when they were awarded a penalty on the 22 there was no hesitation in going to the corner.

The lineout was disrupted, but the hosts nevertheless maintained possession and capitalised on the position, Kieran Murphy going over for the opening score with just five minutes on the clock.

Cov had had barely any possession in the opening 10 minutes, but when they strung some phases together they put Ealing under pressure to strike back. Coming quickly from a lineout Ryan Burrows made a half-break, Rory Jennings sent a kick to the corner, and with Ealing putting a block in on a chaser referee Matt Carley awarded a penalty on the five-metre line.

Jennings kicked to the corner and the forwards did the rest with an irresistible drive that took Darren Dawidiuk over the whitewash.

It was the reply Coventry needed, but Ealing responded in kind immediately, Matt Cornish coming up with the ball from an identical position at the other end of the field.

Given the conditions it was no surprise that Cov put boot to ball regularly, but it was with deftness and subtlety not power, and soon the visitors were camped on Ealing’s line. A Jennings chip was taken back over the Ealing line and Coventry started to go through phases from the scrum.

This time Ealing held and cleared, but with a penalty awarded for not rolling away on halfway Jennings sent play deep into the home red zone. A deliberate knock-on from Craig Hampson saw the home scrum-half depart to the sin bin, and when Cov went back to the corner they were over for their second try.

The pack drew in the defence, with Jennings’ line a good one to take him over the line.

Back came Ealing, their direct approach taking them from a lineout some 30 metres out all the way to the whitewash. With a number of overlaps created it seemed only a matter of time before the try came, but with Hampson still on the naughty step there was no control at the breakdown, and while Ealing earned themselves a five-metre scrum the defence stepped up to win a penalty to relieve the pressure.

A Maisey missed penalty from the touchline was the final scoring opportunity of the first half, but within a couple of minutes of the re-start Coventry were back on their own line. Tom Kessell came up with a crucial strip off Craig Willis, but the home fly half was not deterred and his vision in Ealing’s next attack was crucial in creating the eventual try for Rayn Smid.

This was a rare moment of finesse from an Ealing outfit which otherwise stuck to route one. It was an effective tactic, though, and bore fruit with a fourth try from Harry Casson that followed phase after phase of picking and going around the fringes, and with 20 minutes to play it looked like the contest was sealed at 28-14.

Then all of a sudden Coventry struck, and in some style, too. A lineout on the right was disrupted and cleared by Ealing, but this just gave space for replacement David Halaifonua to build up a head of steam. Play came left quickly and Jennings showed lovely dexterity to draw the final defender and send Max Trimble up the touchline to score.

The try was good, but even better was Maisey’s conversion, which was judged beautifully to take the wind into account and bounce the ball in off the right-hand upright.

The game now back in the balance Coventry had the momentum, turning a penalty into a scrum five metres out. The decision was understandable given the way the visitors’ pack had demolished Ealing at the previous setpiece, but second time around the Trailfinders did enough to turn possession over.

And when they had the ball on halfway with five minutes to play it seemed that all Ealing had to do was play out the clock in the right areas of the field, and the kick they sent to the heavens was the appropriate thing to do.

However they had not taken James Stokes’ eye for a gap and turn of pace into account. Calling a mark superbly under pressure, the full back tapped quickly and turned on the afterburners.

Pete White and Trimble took play up the left wing and deep into the 22, with Jennings finding the unmarked Halaifonua with a beautifully-judged cross-field kick to the right corner to finish off a pearler of a score.

Just as good was Maisey’s touchline conversion which brought Cov level with three minutes to play.

This was enough time for both teams to have a chance to win it, Cov sending a penalty to touch to set up a maul, and Ealing somehow fashioning a break from deep which had the visitors scrambling.

Neither opportunity was finished off, and a final fumble brought the full-time whistle.