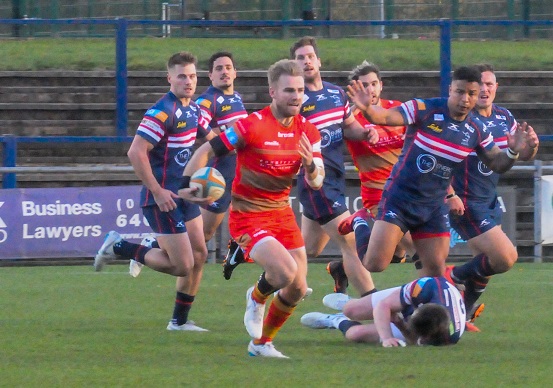 Heath Stevens in action at Castle Park in the autumn (pic: Nick Meredith)

Home schedule complete, Cov take to the road this Easter weekend for the penultimate round of matches in this season’s Championship.

The meeting at Castle Park on Saturday will be the fourth time Cov’s hosts, Doncaster Knights and the Blue-and-Whites have clashed this season.

Two of those were in the Championship Cup, while the league contest in early January at the BPA saw the Knights travel home with a hard-fought 17 -23 win.

Although the clubs go into Saturday’s match safe in the knowledge that the relegation place will be filled by either Hartpury RFC or Richmond, both retain every incentive to pull off a victory.

In Doncaster’s case, director of rugby Clive Griffiths has apparently set his squad the target of a top half finish. With another home match to come – against Cornish Pirates – the Knights will doubtless view that as achievable, despite last Sunday’s defeat at local rivals Yorkshire Carnegie following a performance described as being full of endeavour.

From a Coventry perspective, a disappointing run since Christmas has brought just three wins, while the squad is still searching for that elusive first away success of the season. With fears of being drawn into a relegation scrap now out of the equation, Coventry go into the match able to concentrate on getting that monkey off their backs.

League-position wise, it could not be closer. Doncaster currently lie ninth – one place above Cov. With some of the pressure off, what will that bring?

Cov certainly know that victory at Castle Park is very achievable having lost the cup contest there earlier in the season by just a single point.

What can Cov expect to face? Home winger Dougie Flockhart has been a thorn in their side more than once in the past, and the Scot, who has played both union and league, is again his club’s leading points scorer this season.

He is followed by fly half Kurt Morath, who was born in New Zealand and represented Tonga in the 2011 and 2015 World Cups, while scrum half Tom James is currently the Knights’ leading try scorer.

There has also, of course, been some player movement between the clubs during the season.

One of Cov’s recent signings, centre Will Owen, returned from the Knights to his city of birth, while prop forward Charlie Beech has since Christmas been released by Cov allowing him to sign for Donny.

How close will Saturday’s Easter meeting turn out to be? Given the dry ground conditions currently prevailing, indications are it could be a high-scoring, free- running encounter, and every bit as hard-fought as the clubs’ three previous meetings this term.

Kick off time at Castle Park is 2.30pm. The Supporters Club are laying on a coach from the BPA, which departs at 10.30am. Bookings can be made on line up to 1pm on Friday at CRSC1874@gmail.com