Didi rugby Coventry up and running 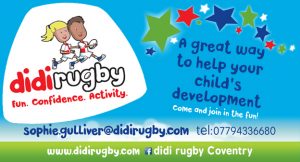 With almost 100 people in attendance on the day, the new programme, that aims to enhance participation, build confidence and get young people active whilst learning the basics of the sport, was deemed to be a great accomplishment.

“The didi rugby Coventry launch was a great success, there is a real buzz around the city at the moment and didi is a way of bringing parents and children together through a sport which promotes such great values,” Sophie Gulliver stated.

“All the parents and children got involved and the compliments we have received following the session really is a testament to Vicky and what didi strive to achieve…. fun and confidence through activity-based sessions.

“This is just the beginning and we are excited to take didi to the Coventry children.”

The day entailed many fun activities for children and their parents to get involved in, this also included a picture with Coventry Rugby’s National League One trophy, which many has their photo with.

Fronting the new Coventry franchise, Tony Gulliver, also known as Gully, thought the day was a great success despite the poor weather, with the club being able to facilitate a fun, exciting time for all.

He said: “I though the launch of didi rugby went really well, it was a shame about the weather as that may have put some people off.

“We still had a decent turn out and we had fun doing it. Twelve players attended which was really good, they interacted with the children and parents very well.

“It was also nice to have the Trophy at the launch, plenty of children/parents and other family members had their Photo taken with it, which was pleasing to see.”

Since the free taster session held at Butts Park Arena, didi rugby are pleased to announce that they have received a lot of interest for long-term sign up’s.

If you are interested, you can sign up by going to www.didirugby.com. Click on ‘find a class’ and put in CV5 – Butts Park will show and continue to our system ‘teamup’ to register for classes.

Class venues will be at the Butts Park Arena (Saturday’s) and the second venue is Eastern Green Village Hall (Sunday’s).