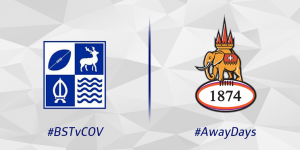 Ross Stewart has named his Coventry Rugby Development XV side ahead of this evenings pre-season opening clash against Bishop’s Stortford at Silver Leys.

Will Flinn, Tim Bitirim and Louis Roach are all included for the development XV after making an impact in the senior sides 62-14 win over Birmingham Moseley to win the Harry Walker Memorial Trophy on Saturday.

Bitirim, who signed from National League One side Loughborough Students scored on his first appearance in Blue and White on Saturday as well as team mate Louis Roach, who has recently represented Harlequins as a guest in the recent Premiership 7s tournament at Franklin’s Gardens.

The side includes experienced first teamer and Young Player of the Season, Luc Jeannot, will earn his first runout of pre-season as well as Olly Povoas, Dave Brazier, Ben Palmer, Cameron Gray, Kwaku Asiedu, James Neal, Willie Priestley and Jack Higgins who all featured in Coventry’s title-winning season in National League One.

Will Flinn also made an impressive first appearance for Coventry during the 10 try win over Moseley and will feature from the bench in tonight’s match.