DAN LEWIS IN THE COMMUNITY A Community in Common 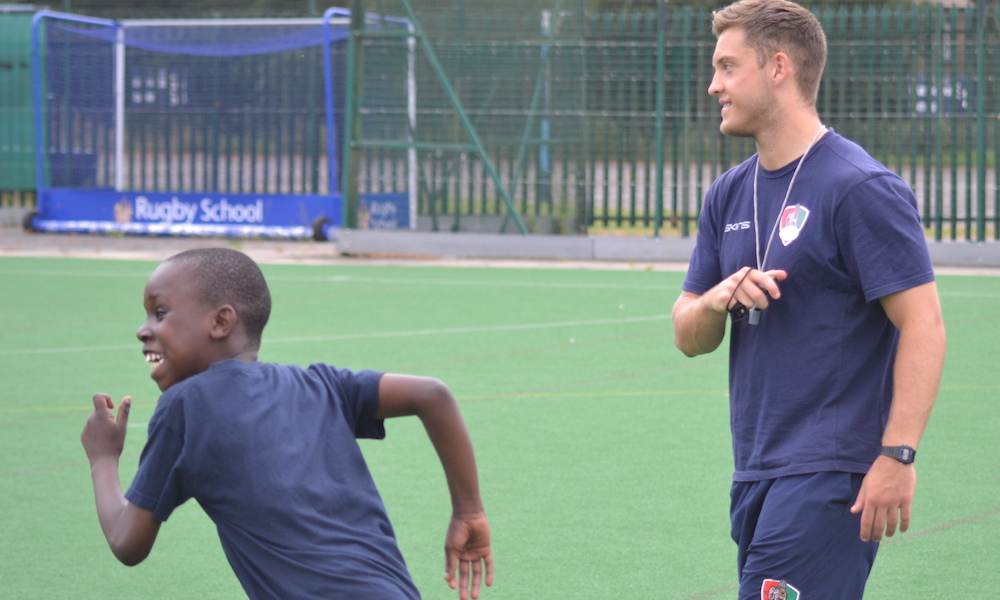 Admittedly, when I first decided to write a piece centered around the community branch and aspect of the club – I wasn’t exactly too sure where to start. Not because I thought there wasn’t enough to write about, but because it is actually not the easiest task to articulate and verbalize what essentially makes up the life and soul of a place like Coventry Rugby Club.

The club itself would be very little without the community and work that takes place within it – and I very much believe that the community would bear a similar fate without its rugby club.

Since day one, I was made aware that this club plays a massive and important role within the community of the city; I work as a coach in the local schools alongside a long list of players within the senior and development squad. However, the honest truth is that I couldn’t figure out how to make any of what I did relatable and relevant to an ‘easy to read’ yet somewhat interesting journalistic piece.

So, I did what any wannabe writer with no degree, and average ‘A’ level scores would do. I did some research, well… I asked for help.

Since moving to Coventry just over one year ago today, one thing stood out so pressingly about this rugby club I had joined that was so unique to others I’d known before: its location. When I thought of every away game I’d ever played in since my tag rugby debut for Colchester Under-8’s back in 2003, how many times had I turned up to a ground that was flat bang in the centre of a city? Never. Immediately, the importance of this club, and its ability to bring members of this city’s society together became very much apparent. Once a week, the populates of Coventry have a focal point of sporting support, cheering on 15 players with one message shared by absolutely everyone in earshot of the referee’s whistle; ‘Our Club, Our City’.

Within the club we talk about how we can live this hashtag on a daily basis. However, in writing this, I came to the realization that I couldn’t just slap on a media tool like a catchy phrase in the form of a hashtag, and have people truly know what it meant. I mean, first I had to think if I’d really taken the time to figure out what it meant to myself.

To me the question became; why our city? Why our club? Why does it mean so much to me to get the opportunity to wear the blue and white on a Saturday afternoon? Why do I go out in to primary schools with a bag full of tag belts and rugby balls?

In an age of touchscreen devices and the impossible task of escaping an Apple logo, so much is reachable, yet so little is tangible in today’s world. Imagine being a kid today, you can find out the answer to your 1,000 questions about the meaning of life in five minutes. You can play with your friends after school without even leaving the sofa, and you can pretty much get Siri or Alexa doing your homework for you.

So, what if, even if only for an hour or two a week, a real and tangible form of inspiration in the shape of a local rugby player coming in to coach your class and join in your English lesson, could affect one child in a positive manner? Then surely it was worth making it happen. Then surely the community side of the rugby club was more than just a branch of the business to create a couple more jobs – it was something with a purpose, it was something with a goal, a mission to bring something positive in to our city, and in to our community.

It’s no exaggeration to say we live in a time in the UK where with a decrease of inspiration within today’s youth a gang membership becomes more likely. It has never been more important to inspire, to encourage and to lift the youngsters of our city, and our society. They hold every ounce of potential within themselves for both Coventry and the rest of the world. So, when talking about our city, and when talking about our club it is far more than a promotional media tool, it is something to preserve, and it’s something to take care of.

I believe that Coventry Rugby is more than what it says on the tin. Yes, it’s a club that plays rugby, but that is just the start of it. It provides a sense of belonging for all that support it in whatever way they can. It provides great flashes of hope in a city with uncapped potential. Most importantly, it is the common denominator for so many of us strolling in different walks of life. It is our club. It is our city.

Coventry Rugby has a range of community projects and programmes for schools and grassroots rugby clubs throughout the city and broader area, from coaching sessions through to using rugby to inspire children and young people to achieve more in their school life or inspire them to a brighter future. To find out more email community@coventryrugby.co.uk