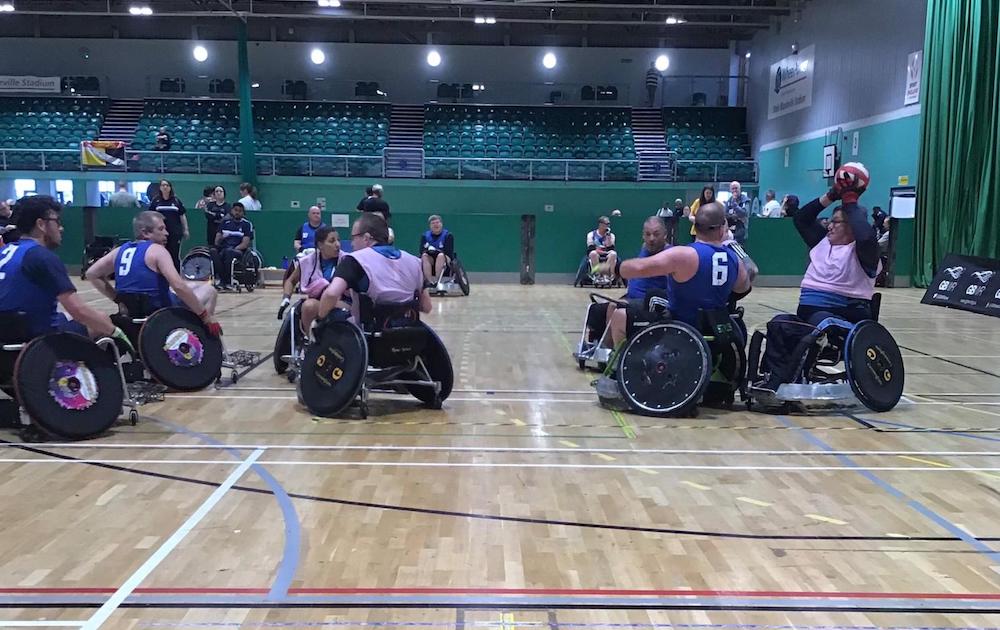 The opening game was against the Woodbridge Warriors and the team got off to a clinical start winning 21-8. This set the tone for the pool matches, with Coventry continuing their disciplined displays to beat Hatfield Comets (31-7) and then a well-balanced and sprightly Newcastle Falcons (22-16), coming back from a two-point deficit at half-time to win.

The semi-final was against old foes, Norfolk Knights, who had beaten Coventry in the last two encounters by one point. This game was just as competitive, but the belief in the Coventry group helped them put together a strong and confident display in the second half, finally putting the game to bed with an 18-12 scoreline.

The gold medal game was against the powerful and experienced Help4Heroes Endeavour. The game was filled with turnovers from both teams and the lead exchanged hands throughout. As the game drew to a close Coventry managed to convert two turnovers in a row to win their very first championship! In a very close encounter the final score was 15-14.

The trophy meant that Coventry finished in a very creditable joint-third place overall out of eight at the end of the team’s first ever GB Wheelchair Rugby 5s campaign, behind Norfolk Knights and Help4Heroes Endeavour.

Coventry Wheelchair Rugby has been slowly building since the start of the year under the guidance of Head Coach Mandip Sehmi, a GB and with the support of Coventry Rugby Foundation Manager Hal Sparke.

Sehmi says that he could not be prouder of the efforts of players and volunteers alike.

“It’s been an amazing effort from the team in their first season!” he said. “Most of them only tried playing wheelchair rugby eight months ago for the first time, so winning this series and finishing in the top three overall is outstanding!

“The commitment and progression has been brilliant, and we’re already looking forward to building on these results and experiences for next season.

“I would like to thank the players, Coventry Rugby, the Community Foundation, our sponsors, RML, and other funders, Ben Gulliver and Hal Sparke who have supported the creation this team and finally, I have to give a special mention to Leanne Taylor who volunteers to support the team at training session and tournaments. The team relies on volunteers who support the club; without them we could not play, so thank you Leanne!”

A number of grants secured by the Foundation from The National Lottery, The Rowlands Trust, The Bruce Wake Charitable Trust, The Midland Adult School Union, and the Edward Gosling Foundation have been crucial to the team’s development, not least because they have funded seven brand new playing chairs, which arrived in time for the final GB Wheelchair Rugby 5s tournament.

The Coventry Rugby Foundation is dedicated towards making rugby accessible to the whole of the city’s community. The Wheelchair Rugby team has quickly become a flagship programme for the Foundation, and Sparke says that there is plenty of potential for its impact to grow and grow.

“It has been brilliant to see the wheelchair rugby team go from strength-to-strength over the summer, and to see the hard work of Mandip, Leanne and the players pay off with the tournament win in Stoke Mandeville last weekend,” he commented.

“The funding we’ve received has been crucial in helping us develop, and with RML having also come on board as the team’s main partner we all believe that this is just the beginning and that there is more to come.”

The Coventry Rugby Wheelchair Rugby team is sponsored by RML.

If you would like to get involved with Coventry Wheelchair Rugby, either as a player, volunteer or partner contact Hal Sparke via hsparke@coventryrugby.co.uk