Coventry take sting out of Wasps with colossal second-half performance 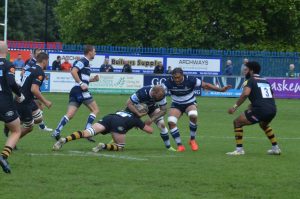 Wasps opened the scoring after 60 seconds as Will Simmonds raced through, but Coventry replied with six points from the boot of Will Maisey before the visitors built upon their lead with a second score from Ross Neal.

Coventry exploded into life in the second period with six scores as a flailing Wasps defence fell asleep with scores from Scott Tolmie, a Heath Stevens and Pete White brace, and a further score late on from debutant James Voss.

On a slippery surface Coventry were hindered early on as a knock on allowed Wasps’ Joe Simpson to deliver clean ball to Ross Neal who broke his line to send Simmonds through to go under the posts.

The Blue and White’s responded well as Will Maisey slotted a kick to the corner for Junior Bulumakau to chase but Owain James collected well and the pressure seized as Wasps cleared their lines.

But hosts managed to gain good field position soon after through James Stokes and Junior who set up the ball well and from the following phase play earnt Coventry a penalty which Will Maisey converted.

After a period of physical phase play, Coventry began to dominate in the scrums and were catching a young Wasps side off guard on more than one occasion as another offside call again hampered the visitors, and Maisey converting again to bring Cov back within a point.

Jon Pendlebury’s men then executed another cut-edge chance with experienced half-back Joe Simpson delivering a quick spin pass to Ross Neal who found a great line and dived over in the corner under pressure to restore a firm lead for the visitors.

Cov came close as Sam Tuitupou broke away from straggling defenders to reach the five-metre line but a good turnover from Tim Cardall denied the hosts again.

But the side got their reward just minutes later as replacement Jack Ram smashed his way over after good work from Latu Makaafi.

The hosts continued to dominate at the set piece as the game approached half-time but were caught out on the break by a pacey Wasps backline and with the opportunity arising Sunni Jardine went for a long-range effort at the sticks but missed narrowly.

The sides battled to attain some daylight before the half was up but as the whistle blew, in an even first period, the two sides went down the tunnel with a point separating them.

The visitors again were on the front foot after the break, but Coventry struck first blood in the second period with Scott Tolmie crashing over from close-range after a powerful driving maul.

And the mauling from the Blue and Whites continued with the hosts adding a quick-fire double, the first came from captain Stevens making a dart across the line and the birthday boy ran in untouched.

On his debut, Voss crashed over shortly after a powering phase of offloading and front foot rugby to stretch the lead further for the hosts.

As Wasps fell apart on the field David Halaifonua took charge with a chartering run and as he passed through five flailing defenders he willingly offloaded to White to score.

And the scrum-half quickly added his second of the match with another overpowering driving maul form the forward pack which allowed White to pounce over as soon as he saw the whitewash.