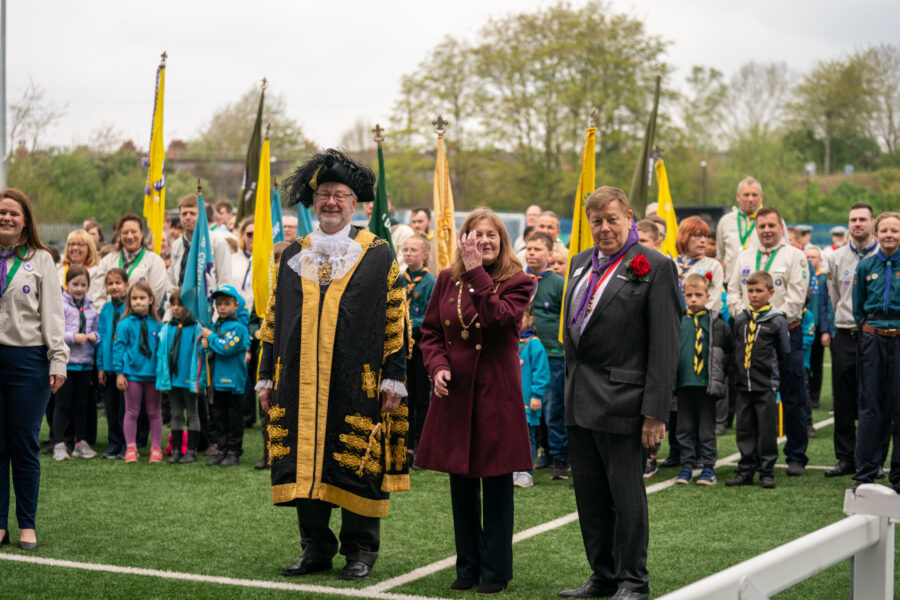 On Saturday the 23rd of April 2022 – the same day as the Coventry vs Ampthill Championship Cup clash at Butts Park Arena, the Coventry Scouts came together to celebrate St. George’s Day among their community.

The day opened with a parade and flag salute to the Lord Mayor of Coventry, Councillor John McNicholas, who was the guest of honour at the parade. The Scouts band accompanied the parade and set the beat of the marching drum.

The Scouts and leaders then gathered in the XL Motor Stand for a St. George’s Day presentation by young Scout groups, who explained the purpose of the day as well as reminders of the Scouts’ promise and law. This was followed by an awards ceremony for standout members among the different branches in Coventry.

Coventry Rugby’s Community coaches then led a range of activities on the pitch for the hundreds of Scouts, with the help of first-team players including; Nile Dacres, Joe Snow and Rob Stevenson who led activities in rounders, cricket, football, rugby, basketball and more. This was then followed by the Coventry vs Ampthill game at 3pm.

Community Manager Richard Meacham commented “being a community driven club, it was great to be able to put on activities for the Scouts today and really unite two great Coventry community organisations. It was great to have the Lord Mayor, Councillor John McNicholas back at Butts Park – we have a great relationship with him and he often attends different community initatives we run through our Community department. We look forward to stregthening our relationship with the Scouts and helping lead activities where possible”.