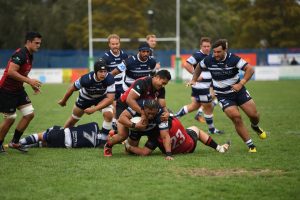 Coventry Rugby cruised to a 62-14 victory as the Championship outfit wiped aside midland rivals Birmingham Moseley to win the Harry Walker Memorial Cup.

Scores from Scott Tolmie, Pete White, Heath Stevens and a brace from Junior Bulumakau gave the visitors the ascendency seat at the break with Josh Poole adding one for the visitors.

Ollie Allsopp scored a consolation for Moseley as a James Stokes brace accompanied by scores from Tim Bitirim, Darren Dawidiuk and Louis Roach who rounded off a spectacular occasion at Butts Park Arena.

The game was stopped after just three minutes due to a serious looking injury to Moseleys’ Ryan Roach which set the game back fifteen minutes.

But as soon as play resumed, Coventry fired off the mark with power and intensity and after an infringement at the ruck, Maisey kicked to the corner from the following driving maul which allowed Tolmie to crash off the back to score the opener.

Moseley responded quickly with their own, a great turn in phases and after Williams was held by the line, Poole found his way over as the scores were levelled.

After some tough phase play it was Coventry who found the lead once more, new signing Junior Bulumakau darted over in the corner thanks to a generous pass from captain Heath Stevens.

The hosts then doubled up in quick succession as Maisey produced a delicate kick through the gap and White pounced on the loose ball to go over under the posts.

As Coventry continued their surge of dominance, Man of the Match David Halaifonua continued to cause havoc in the opposing 22 with a sublime run from his own defensive area, which led to Ben Adams dinking a delightful kick through for a hungry Junior Bulumakau to convert his second of the match.

Moseley started to convert some pressure in the game, but it was cancelled out by Charlie Beech, who managed to turn over the ball from the scrum after Jack Ram held the ball up,  the ball then saw both touchlines before Stevens pounced over the whitewash with a neat score.

And after a dominant first period it was the hosts who went down the tunnel with a convincing 31-7 lead after scoring five tries and controlling majority of the ball during the first period.

But, the Blue and White’s continued how they left off in the second period, the visitors had a mismatch of handling on halfway and the prolific National League One top try scorer James Stokes took heed of the opportunity and raced clear for Coventry’s sixth of the game.

Again, after a dominant period of possession Coventry capitalised with another score, this time Andy Bulumakau regaining possession, Jack Ram broke clear and Bitirim collected to score in the corner on his debut.

The hosts quickly added their third try in the second period with hard-hitting hooker Dawidiuk finding the line after a strong set piece move from the lineout which led to the determined front row forward crashing over from close range.

Moseley did get themselves what can only be described as a consolation score, Williams made a neat break and fixed his man before offloading to Ollie Allsopp who scored under the posts, but the hosts responded quickly with a fast set of hands from Stokes who managed to find Louis Roach clear in the corner.

Coventry rounded off the day in sensational fashion, scoring their tenth try of a rather one sided affair, this time Stokes finding his brace, a good piece of interplay from the backline found the winger on the outside shoulder who went in to score untouched.

The Blue and Whites ended the match with a short presentation, David Halaifonua receiving the Man of the Match award for several big runs and monstrous hit during the match.

The new Harry Walker Memorial Cup was then presented to Heath Stevens by Harry Walkers son which rounded off a great day at the office for the squad.

Coventry Rugby next travel to Ireland to face Leinster Development on August 18 at Energia Park for the second pre-season run out.