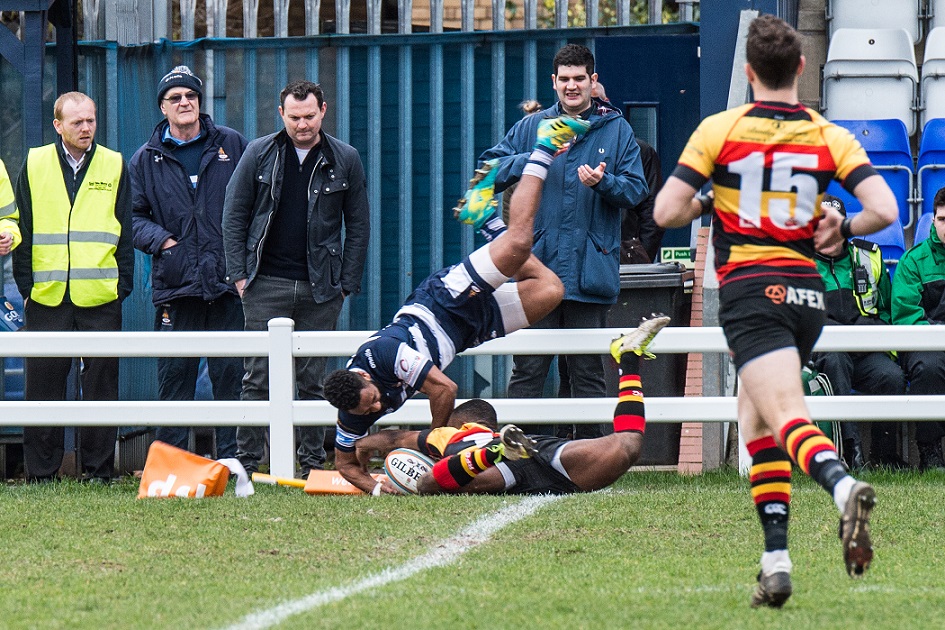 A try in each half sent Coventry Rugby to a battling 20-16 round 16 Greene King IPA Championship home win over Richmond.

The Blue-and-Whites built a 13-7 half-time advantage through Andy Bulumakau’s early try plus eight points from the boot of Dan Lewis.

After the visitors responded on the stroke of half-time through Luc Jones’ try, Heath Stevens got on Tom Emery’s shoulder to restore Cov’s 13-point advantage early in the second period.

When Richmond missed touch home winger Bulumakau escaped opposite number Marcus Webber to create an early chance only for the visitors’ scramble defence to snuff out the danger.

However, Cov’s No.14 was not to be denied and he soon claimed an excellent opening score with an athletic finish in the corner following a series of powerful forward carries.

Lewis, who converted from the touchline with a fine kick, then added a penalty from 35 metres when Richmond were caught offside.

With the support of the gusty wind, Cov continued to dominate territorially, but despite making a couple of promising line breaks were unable to translate this into points.

Rob Knox went closest to adding a second try early in the second quarter when he burst through the Richmond ranks from a scrum inside his own half only to be hauled down five metres out by a superb cover tackle by Jones.

The visitors’ defence also held firm when Lewis planted a penalty precisely to their five-metre line, however Cov’s fly half did eventually add a second penalty – from 30 metres – after he was tackled high.

But enough time remained before half-time for the visitors to claim their first score direct from the kick off. It was created by Will Warden, who broke from a ruck, finished by supporting scrum half Jones and converted by full back Kirby.

The arrival of replacement props Phil Boulton and Jamal Ford-Robinson – who was making his Cov debut – forced a scrum penalty early in the third quarter, after which the hosts claimed a superb long-distance counter-attack try.

This score owed everything to another on-loan Northampton Saint, Tom Emery, who stepped his man and raced 60 metres to the Richmond five-metre line where Stevens picked up the scraps to claim a try which Lewis brilliantly converted.

Kirby responded for the visitors with a 40-metre penalty, and Richmond’s No.15 was then on the mark for a second time, this time from halfway, after Cov were penalised in the contact area.

This left the Blue-and-Whites holding a seven-point advantage as the match passed the hour mark, but when they infringed on the ground after running from a scrum inside their own half, Kirby reduced the visitors’ arrears by a further three points.

However, that was as close as Richmond got, and after the home forwards won a series of penalties that took play into the away 22, the visitors settled for a losing bonus point.