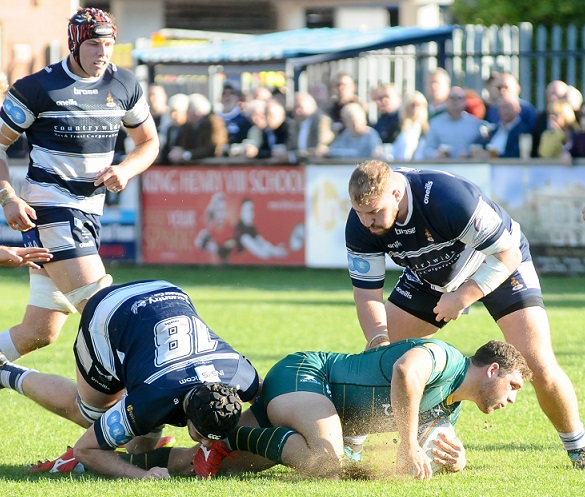 Coventry Rugby’s coaching group must contend with a number of fitness doubts ahead of Saturday’s third round of Greene King IPA Championship Cup action against Nottingham at the Butts Park Arena (3pm kick off).

However, director of rugby Rowland Winter anticipates that Cov will be able to field a matchday squad similar to that which claimed seven tries and a thrilling bonus-point win over Yorkshire Carnegie last weekend.

“We are expecting Andy Bulumakau, Heath Stevens and Sam Tuitupou to be back in the next seven days. If they don’t make it for Saturday they will be back next week for the return game in Nottingham,” Winter confirmed.

“David Halaifonua is two weeks away from being back in contention now after recovering from his knee injury.”

A number of blue-and-whites also picked up knocks during their team’s round two win, and final decisions on their availability to face Nottingham will be made later this week.

“Will Maisey is fine and training fully, and we’re hoping James Stokes will just about be fit after coming off with a twisted ankle,” Winter advised.

“James Gibbons also picked up a knock, and at the moment James Voss and Alex Woolford are walking wounded after each game and we have to put them back together for the following weekend.

“But all in all, we expect to put much the same 22 that faced Carnegie back out on the pitch this weekend.”

Although Coventry’s boss believes two more wins will be enough for his club to claim one of the eight available quarter-final spots in this newly-launched competition, he remains focused on developing performance levels.

“Three wins should put us in a qualifying position,” he said, “but we have four games to go in the pool and are looking to win them all.

“It’s all part of the building process. If we can pick up some wins along the way then brilliant, but it’s performances that we are really looking to build before the league starts again in December.

“The win against Yorkshire was another step forward from the improved performance at Doncaster. To put in that display and claim a good win was very pleasing – it felt like it had been a long time coming.”

Coventry will also be without back-row forward Dan Faleafa, who is part of the Tonga squad which faces Georgia in Tbilisi on Saturday afternoon.

The 29-year-old, who won his 18th cap during his country’s defeat by Wales last Saturday, returns to the Butts following this weekend’s international action.