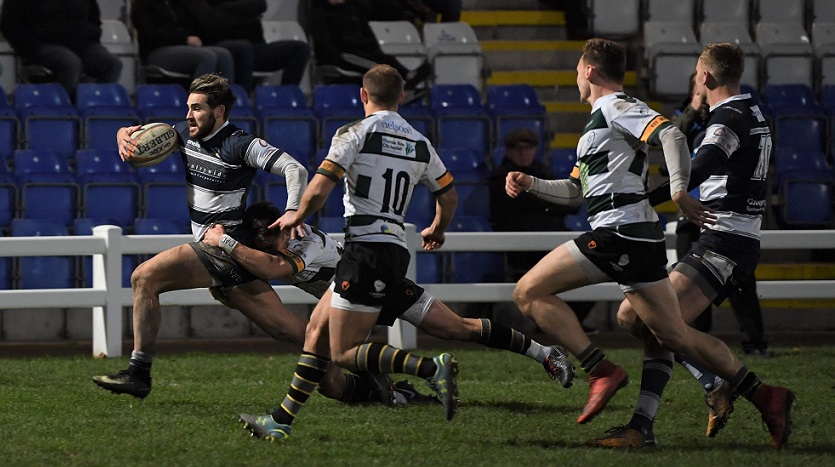 However, after building a 21-point advantage in the opening 16 minutes, the hosts made hard work of finishing off spirited opponents who twice took the lead during a topsy-turvy second half.

But despite its nail-bitten nature, this bonus-point win, allied with Yorkshire Carnegie’s defeat of Doncaster, sees Cov move to the top of the pool one table after three rounds of action.

The hosts took the lead after five minutes when last week’s man-of-the-match Rob Knox powered over following a nice interchange between debutant Dan Lewis and Trimble.

Will Maisey converted, and the home fly half was on the mark again six minutes later after Knox returned the compliment to send Trimble skating over following Pete White’s long cut-out pass.

The home scrum half also played a key role in his side’s third try, intercepting in the wide channels before reversing play to launch Cov’s backs down the left. Quick ball on the ground then saw hooker Darren Dawidiuk send Nathanael Titchard-Jones under the posts for a score which Maisey improved.

Nottingham hit back early in the second quarter when former Moseley hooker Jake Farnworth was driven over from an attacking lineout for a try which Darryl Veenendaal converted.

And the visitors nearly claimed a second score from an identical manoeuvre minutes later, only for White to wrap up Farnworth and prevent the ball being grounded.

But another solid lineout did then create the position from which Nottingham claimed a second try, finished under the posts by centre Luke Peters after a slashing diagonal break from scrum half Murray McConnell did the initial damage.

After a fine tackle from Junior Bulumakau prevented Alex Goble scoring a third Nottingham try, Cov showed good enterprise to run from their own 22, then tap a penalty quickly on halfway.

And their reward arrived in the shape of a try bonus point when Lewis’s well-timed pass sent Trimble down the touchline to the corner.

However, the visitors struck back before the interval through Farnworth, who forced his way over after his forwards stole possession from the kick off.

Veenendaal’s conversion closed Cov’s half-time lead to five points, and this was wiped out five minutes after the restart when the visitors’ lineout drive took them close before Goble grabbed McConnell’s offload to score a try which his fly half again upgraded.

The visitors lost replacement Devante Onojaife to the sinbin for obstructing White’s quick tap, and after Cov put the resulting penalty to the corner Phil Nilsen finished off a lineout drive and Maisey converted via the upright.

The visitors led for a second time 15 minutes from time, when wingers Harry Graham and Goble combined to send on-loan Wasp Tim Cardall under the posts for a score which Veenendal improved.

Cov then finally seized control through two tries in as many minutes. The first saw Trimble complete a hat-trick after a good spell of home continuity, after which some slick handling and support ended with Lewis taking George Oram’s offload to claim a converted try.