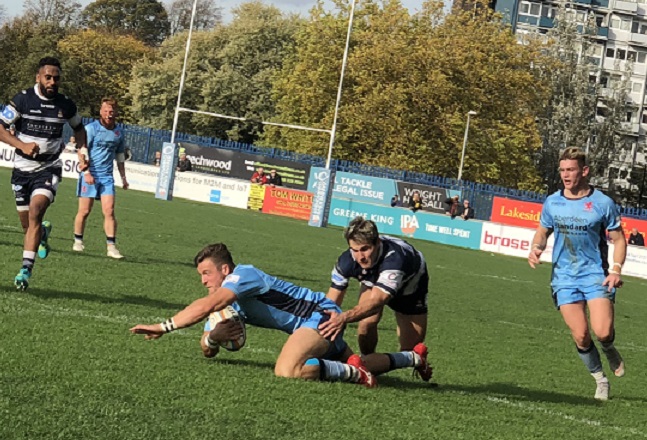 Max Trimble in first half action

Coventry claimed their third home win in four starts – and a try bonus point – courtesy of a 29-27 win over London Scottish.

But the hosts had first to withstand a heart-stopping finale, as sparked by a second-half Rob Stevenson hat-trick, the Exiles reduced a 14-point deficit to two before one final determined defensive set ended their hopes.

Tries from Tony Fenner, Pete White and Alex Woolford enabled Cov to build a 19-3 interval advantage with a strong wind at their backs.

However, Mark Bright hit back for the visitors soon after the restart, and despite further scores from Max Trimble and Scott Tolmie, Stevenson’s 24-minute three-timer meant Cov were counting down the seconds to the final whistle.

Playing with the elements, Cov dominated possession and territory in the early stages.

And their reward was almost immediate as Sam Tuitupou carried strongly then Jake Sharp’s nicely delayed pass sent Fenner to the corner.

James Stokes was then forced off by injury, and his replacement Andy Bulumakau made an instant impact. The former Doncaster centre broke from inside his own half and linked with Fenner whose inside ball sent White racing to the posts for a try which Sharp converted.

The visitors’ first spell of pressure on the home 22, led by a strong carry from lock Byron Hodge, eventually produced a simple penalty for fly half Rory Jennings.

However, the Exiles’ respite was short-lived since the hosts claimed a third try early in the second quarter.

Sam Tuitupou carried strongly deep into the visitors’ 22, after which the blue-and-whites retained possession patiently until the forwards drove new signing Woolford over for a try which Sharp improved.

Scottish needed to hit back quickly following the restart – and they did – through experienced No.8 Bright. The former Redruth back-rower was on hand to exploit a home turnover in midfield and gallop over from 40 metres for a try which Jennings upgraded.

And with their tails now up, the visitors closed to within four points shortly before the end of the third quarter when they pinched a Cov scrum then spread the ball left where Stevenson forced his way over.

Rowland Winter rang the changes from the bench, and the fresh legs paid immediate dividend by winning consecutive penalties in the Scottish half. The second of these was sent to the corner, after which the home pack drove replacement hooker Tolmie over for his second try of the campaign.

This left Cov protecting a nine-point lead, but home nerves were soothed somewhat when Scottish turned possession over in the home half and some quick hands sent Trimble racing 65 metres to the corner.

However, the visitors grabbed a lifeline with five minutes remaining when Stevenson went over for his second score on the blindside of a five-metre attacking lineout.

And when the winger repeated the dose deep into injury time, the Butts Park faithful were sentenced to a nervy closing two minutes until referee Hamish Smales’ whistle delivered five very welcome points.