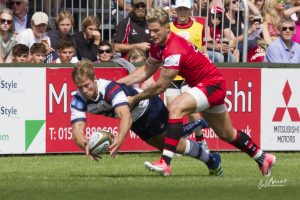 He also captains the side from the No.13 shirt, where he operates alongside midfield partner Sam Tuitupou.

As a result, the versatile Andy Bulumakau moves to the right wing and joins James Stokes and David Halaifonua in a pacy back three.

Tom Kessell and Pete White rotate starting and bench scrum half roles, as do hookers Phil Nilsen and Scott Tolmie.

And Winter introduces the experience of Tongan international Latu Makaafi at blindside flanker alongside countryman Jack Ram and Adam Peters.

“London Irish will be a tough test for us, the squad depth and the playing talent they have is undeniable.

“We’re very much looking forward to the challenge of testing ourselves against one of the best teams in the league – it’s a great opportunity for us to showcase on and off the pitch exactly what our rugby club is all about.

“We have rotated the squad in a number of positions, and with David Halaifonua back fit have switched round the back three.”

Advanced tickets for the IPA Greene King Championship clash, preferentially priced at £18 (seated), £15 (standing) and £2 (ages three to 16) are available before 4pm today from the Butts Park Arena ticket office on 02476 231001.