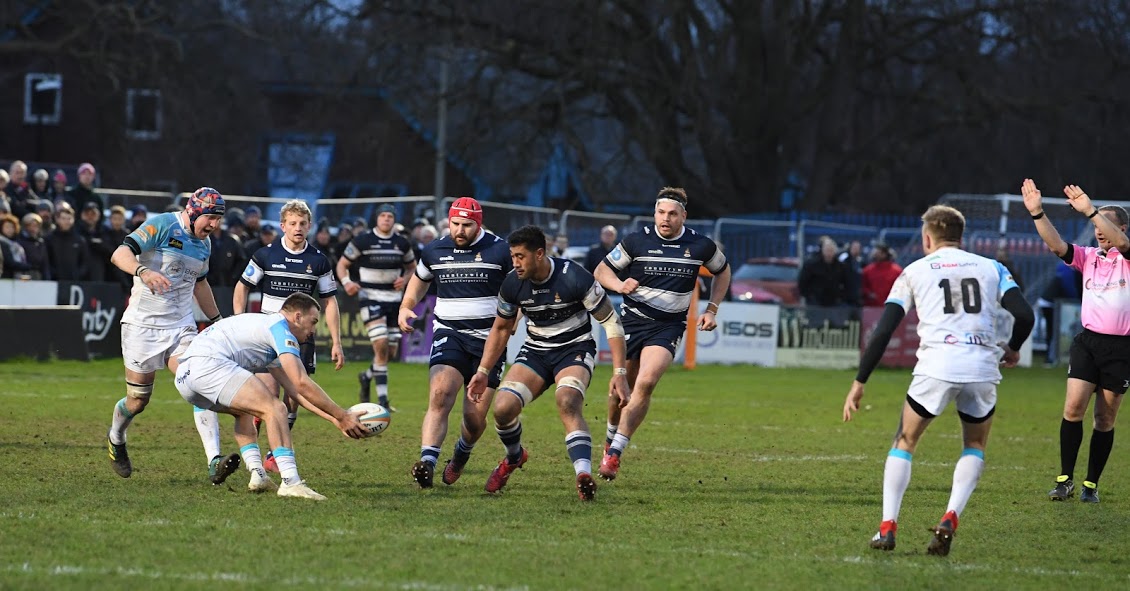 The blue-and-whites trailed by two points at the interval after Will Maisey’s try cancelled out Steve McColl’s earlier effort for Doncaster.

But although scores from Pete White and Scott Tolmie took Cov into a 17-10 lead at the hour mark, Ollie McColl’s try plus a conversion and two penalties from Dougie Flockhart left the hosts with only a losing bonus point to show for their afternoon’s work.

This means Cov remain in seventh place in the table with 24 points as they enter the second half of the league season next Saturday when Cornish Pirates visit the BPA.

After Rob Knox was narrowly wide with a 53-metre penalty attempt the early exchanges took place between the two 22 metre lines.

Then, as Cov sought to go wide, the visitors stole possession in midfield and released full back McColl who found Josh Tyrell in support. Although the hosts’ scramble defence got to the lock, the Knights retained possession until McColl eventually found the space to cross for a try which Flockhart converted.

The retreating Tyson Lewis then narrowly beat Max Trimble to White’s well-weighted chip in the visitors’ in-goal area before Cov suffered a setback as Adam Peters was sent to the sinbin for a ‘no-arms’ tackle.

But despite their numerical inferiority, it was the home side who scored next when Maisey won the race to White’s precise grubber after the excellent Dan Faleafa and David Halaifonua had carried strongly.

As half-time approached, the home side piled pressure on the Doncaster line, twice driving lineouts to close range only to be denied by some robust defence.

This meant the visitors took a slender two-point advantage into the break, which was wiped out immediately following the restart when Faleafa released the rampaging Adam Peters who left White with a simple run to the posts for a try which Maisey improved.

Doncaster struck back through Flockhart’s close-range penalty when Cov infringed at a scrum, before a sequence of penalty awards took the hosts deep into the away 22 from where their forwards drove replacement hooker Scott Tolmie over.

The match took another turn early in the fourth quarter when Doncaster flanker Stedman charged over for a score which Flockhart converted.

A flowing home attack then followed a turnover from a high ball, but Trimble was narrowly unable to outflank the cover.

And following a turnover, a long spell of Doncaster possession ended with the blue-and-whites being penalised in front of their own posts and Flockhart’s simple kick edged the Knights ahead.

The Knights’ veteran winger then added a third successful penalty from 43 metres five minutes from time when Cov infringed on the ground, and when Doncaster repelled one final home driving lineout Cov’s hopes were ended.