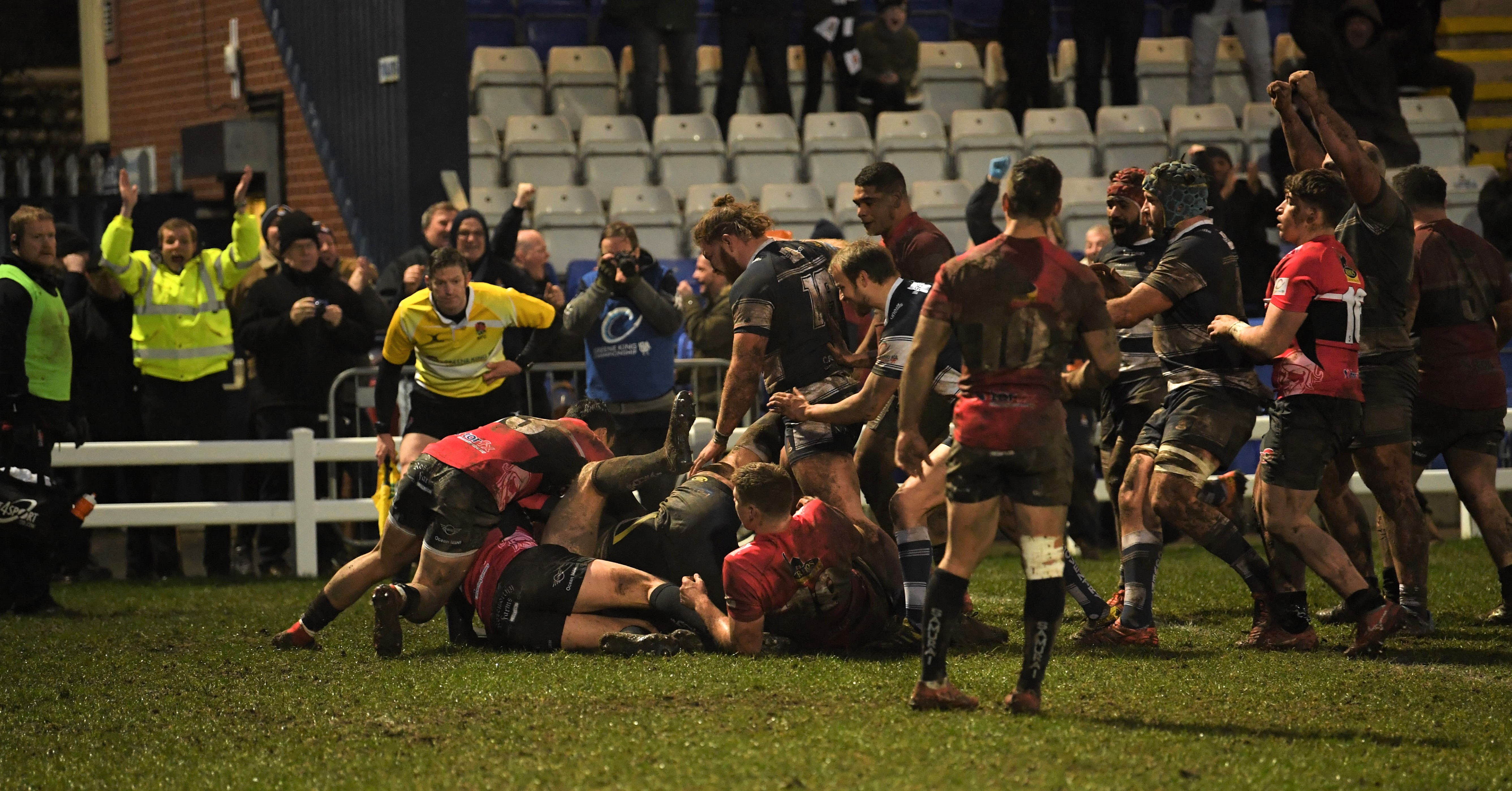 After full back Kyle Moyle crossed for the visitors, Cov trailed 6-14 at half-time before fighting their way to victory through Tolmie’s two second half scores, both of which came when a Pirates forward was in the sinbin.

This result leaves Cov in seventh position in the table with 28 points ahead of next week’s trip to Bedford Blues.

Fly half Javier Alvarez kicked the visitors into an early lead after Cov were penalised on the ground inside their own 22.

The hosts got on level terms when a powerful Dan Faleafa carry established a position from which the Pirates infringed in the tackle area and Will Maisey split the uprights from 35 metres.

The home fly half then charged Alvarez down and hacked on only to be narrowly beaten to the touch down by some scrambling Cornish defenders.

When the visitors infringed at a lineout inside their own half Maisey booted the hosts ahead with a well-struck penalty, only for Alvarez to immediately square things up when Cov took out a visiting player at the next restart.

Pirates winger Alex O’Meara threatened when he got to Callum Patterson’s kick quickest and kicked on only to see the alert Pete White slide the ball into touch.

A powerful carry from Patterson then took the away side within range of the home posts only for Maisey to scoop up a loose pass and break to safety from his own 22.

As the interval approached, the visitors’ front row forced a scrum penalty just outside the home 22 with which Alvarez edged his team back ahead.

And better followed for the Pirates when Fijian international hooker Josh Matavesi carried hard into home territory after which some neat handling sent Moyle scrambling to the corner for the day’s opening try.

This left the hosts facing an eight-point interval deficit, which Alvarez extended to 11 with a 40-metre penalty after Cov were penalised running out of defence.

David Halaifonua’s 40-metre break raised Blue-and-White hopes, only for a solid tackle on the supporting White to kill the momentum.

But Cov were gradually gaining territorial control, and when they pounded repeatedly at the visitors’ line through a series of forward carries Pirates’ flanker Josh Caulfield was shown a yellow card.

And the hosts took immediate advantage by driving Tolmie over from a close-range lineout for his fourth try of the season.

The touchline conversion was unsuccessful, and after the visitors weathered the remainder of the power-play without conceding further points they held a six-point advantage with five minutes remaining.

But the home side then won a sequence of lineout and maul penalties which took play deep into the away 22 where, when referee Neil Chivers’ patience broke, the Pirates lost skipper Brett Beukeboom to the sinbin.

Once again this proved crucial, as the home forwards powered Tolmie over from a close-range lineout for a try which Fenner – standing in for the limping Maisey – converted with a magnificent match-clinching touchline kick.