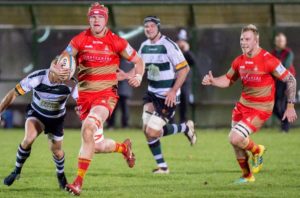 Coventry Rugby would like to thank the efforts and commitment of a number of players who have played first team rugby this season, that will be departing the club this Summer.

Tongan international Dan Faleafa has been seen in Cov’s No.6 and No.8 shirts and the second row on 15 occasions since arriving from France in the autumn.

Second row Tom Jubb, who has made 54 appearances over three campaigns since arriving at the Butts Park Arena in the summer of 2016, will be joining Greene King IPA Championship side Hartpury RFC.

Two more new signings will be announced next week alongside confirmation of the senior playing squad so far for next season.

“Dan has been a great addition to the team over the last few months, and is hopeful of being involved in the World Cup, which would rule him out of involvement with us until the end of October. We will keep in contact with him and there is the potential of linking up again after World Cup if all works well.

“Jubby has been a big part of our squad for three seasons, and has really developed on and off the pitch in that time. We thank him for his effort and commitment to the club, and look forward to welcoming him back to Butts Park Arena next season with his new club.

“Dave has been unlucky with a lack of opportunity and his knee injury ending his season early, we will continue to support him with his rehab and recovery. Cameron has progressed impressively through the Development Academy and into a first team shirt on a number of occasions. He has worked hard to complete his degree and is now looking to combine playing alongside a career in sports management.”

“We wish all the players the best of luck and want to thank them for all their time, effort and dedication in helping the club move forward this season.”