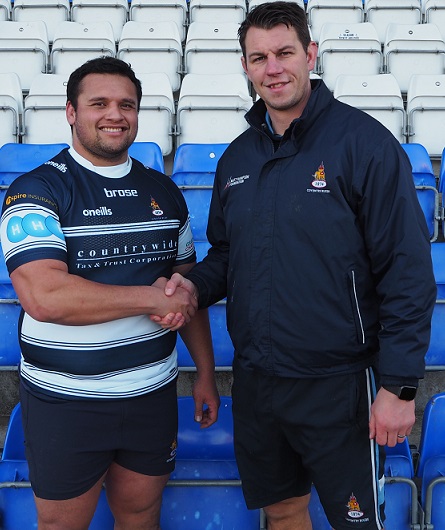 The 25-year-old tight head has won four caps for his country since making his debut against Scotland at Murrayfield during the 2017 autumn series.

Brighouse was selected for New Zealand at U20 level in the 2013 World Cup and has since featured regularly for Otago in the Mitre 10 Cup.

His early club rugby was played in Wellington prior to moving south to sign a professional contract with Otago.

Director of rugby Rowland Winter believes Brighouse will prove a useful addition to his squad.

“The opportunity to sign a tight head prop of Donald’s quality at his age was something we saw as a really good option,” he said.

“The Championship transfer deadline arrives shortly and we wanted to make sure we have a suitably-sized squad with the right personnel within it before then. Donald is known to a couple of players in the squad and comes highly recommended.”

Winter believes fifth-placed Pirates, to whom Cov suffered a 35-10 defeat in Penzance in mid-September, will provide a stern test.

“Pirates have had a lot of travelling in the last week which is challenging for them, but they are a tight unit who have done it plenty of times before and are well used to it,” he said.

“They started the season really well, then after dropping off a bit they seem to have found back their form in recent weeks so we need to make sure we step up from last week.

“They are an experienced squad which is well put together and well coached by Gav Cattle and Alan Paver and we are expecting a very tough game.

“This week we’ve gone back to basics and worked on looking after the ball when we are in possession, sticking to the game plan and everyone doing their own job. If we put all that together I think we will pose plenty of questions on Saturday.”

Cov expect to be without lock James Voss, who was forced off during the first half of last week’s game with concussion, for this weekend’s round 12 Championship clash.

Otherwise the blue-and-whites emerged from the defeat by Doncaster unscathed, while centre Sam Tuitupou plus forwards Jack Preece and Alex Woolford, who continue to work through their rehab programmes, are nearing a return.