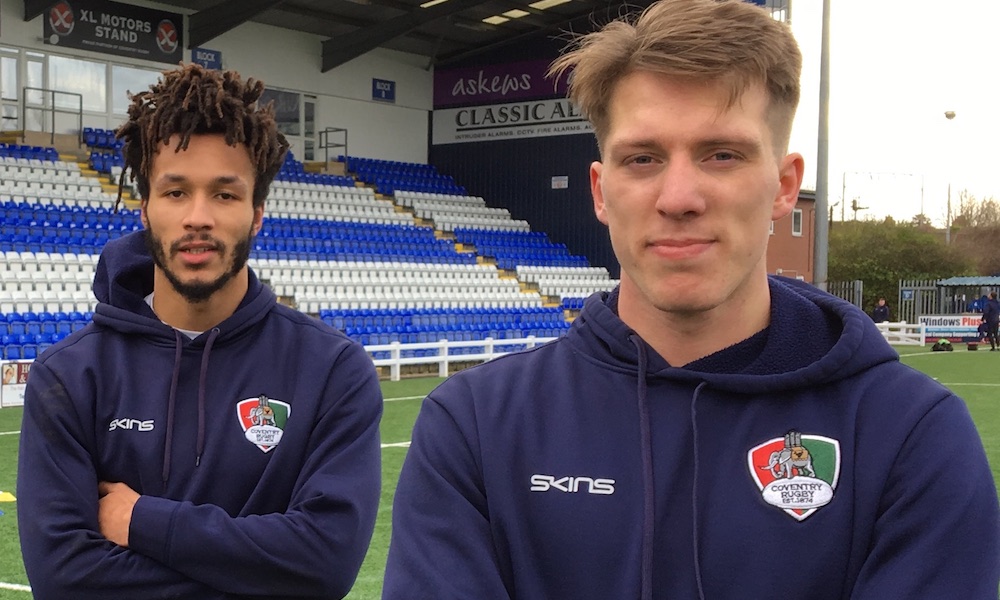 Coventry Rugby has taken action to bring in more options into the club’s squad to cover positions across the back three.

With James Stokes (London Irish) and Henry Purdy (Bristol Bears) having departed to the Premiership in recent weeks and both Max Trimble and Junior Bulumakau having sustained long-term knee injuries the cover in these crucial positions had worn thin.

In the wake of Director of Rugby Rowland Winter has acted swiftly to bring two bright prospects to Butts Park Arena.

Louis Brown has signed a two-and-a-half year contract. The full back, who turns 22 next week, arrives from Old Elthamians, but he has plenty of experience in the Greene King IPA Championship, having been a regular for Yorkshire Carnegie in the 2017/18 and 2018/19 seasons. Brown has also played professional rugby league for Featherstone Rovers.

Ryan Olowofela joined Northampton Saints after a successful two years with England Sevens. The 21-year-old winger scored 15 tries in 39 matches on the World Rugby Sevens Series last season before returning to the 15-a-side game last summer. He has played four times for the Saints’ first team, all in the Premiership Rugby Cup, and scored against Sale and Wasps in the Premiership Rugby Shield. Olowofela is joining Coventry on a dual-registered basis.

Winter says that he and the Cov coaches are looking forward to working with the pair.

“Louis and Ryan are talented and exciting young players who will fit in the type of rugby that we’re looking to play,” he said. “Louis is a strong-running full back while Ryan has the electric pace you’d expect from a Sevens international.

“They’ve also all been positive about their moves to Coventry, which reflects well on what we’re looking to build here for the future. We’re looking forward to seeing them play and are sure that the Cov supporters will be excited, too.”

Both players will be eligible to play in this Saturday’s Greene King IPA Championship home match against Yorkshire Carnegie.