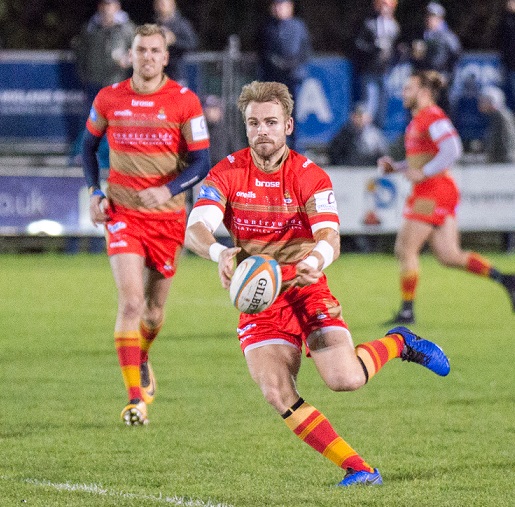 Coventry Rugby have received a major boost with the news that Tony Fenner has signed a new long-term deal with the club.

This contract will keep the 29-year-old utility back at the Butts Park Arena until the end of the 2021-22 season.

Fenner joined the Blue-and-Whites in 2016 after his career had taken in stints in Italy, France, New Zealand and South Africa as well as a spell with Edinburgh.

Since then he has been one of the outstanding success stories of Coventry’s first season back in the Greene King IPA Championship since 2010, appearing in 18 of Cov’s first 19 league and cup games.

During that time, Fenner’s versatility has seen him wear the full back, inside and outside centre shirts before making his first start of the season at fly half – the position in which he has played most of his rugby – at Bedford last weekend.

Unfortunately, his involvement in the 105-point Goldington Road thriller was curtailed five minutes from time by a ruptured pectoral which requires surgery that will keep him out for the rest of the season.

“We are delighted that Tony will continue this journey with the club. He has been outstanding this season and has been one of our most consistent performers while playing in multiple positions which shows his class and ability.

“We will have his injury patched up in no time, and he will be back raring to go in pre-season as we look to build again next year.”

“I am so happy to have agreed a long-term contract with this great club, I am really excited about our next few years and want to be a part of every step as we build.

“I want to thank the coaches, players and fans for the continued support, I love pulling on the Cov shirt to represent this club and city.”