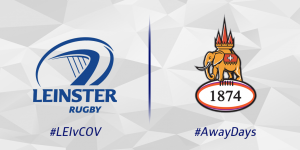 Rowland Winter and his coaching team have chosen their selected 30-man squad that will travel to Dublin to face Leinster Development on Saturday (3pm kick-off).

Stand-out performer and last week’s Man of the Match, David Halaifonua will keep his place in the side but moves from full-back to wing, whilst Ben Adams and Jack Preece are the only others who remain in the starting line-up.

Cameron Gray will make his first start of pre-season as the towering lock replaces Scott Russell, who made an impressive first appearance in Blue and White.

Winter, Nick Walshe and Louis Deacon juggled around with their team selection against Birmingham Moseley, with most of the squad appearing for at least a 40-minute stint.

Phil Boulton replaces Heath Stevens as captain as the front row will compromise a new look for this second outing of pre-season with James Gibbons and Darren Dawidiuk both making first starts.

Tom Jubb joins Gray in the second row after making an impact from the bench against Birmingham, whilst Jack Ram makes his first start as blindside flanker with Adams and Preece making up the backrow.

Tom Kessell and Jake Sharp will make a new partnership in the nine and ten channels with Sam Tuitupou and Andy Bulumakau making up the midfield.

Halaifonua is joined by Max Trimble, who will make his first appearance of pre-season whilst James Stokes comes in at full-back after scoring a brace against Moseley.

Fred Betteridge, Olly Povoas and Tim Bitirim all featured and scored try’s during Coventry’s Development Academy XV game against Bishop’s Stortford on Tuesday, where Ross Stewarts men came away with a convincing 42-19 win.

Leinster’s Development side reached the British and Irish Cup final last season with an impressive run but missed out to fellow Championship rivals Ealing Trailfinders at the last hurdle.

With just 15 days remaining until Coventry kick-off their Greene King IPA Championship campaign, the young Director of Rugby will have his eyes set on his ideal starting XV after the conclusion of this trip to Ireland. 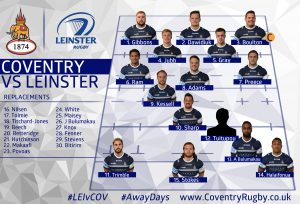