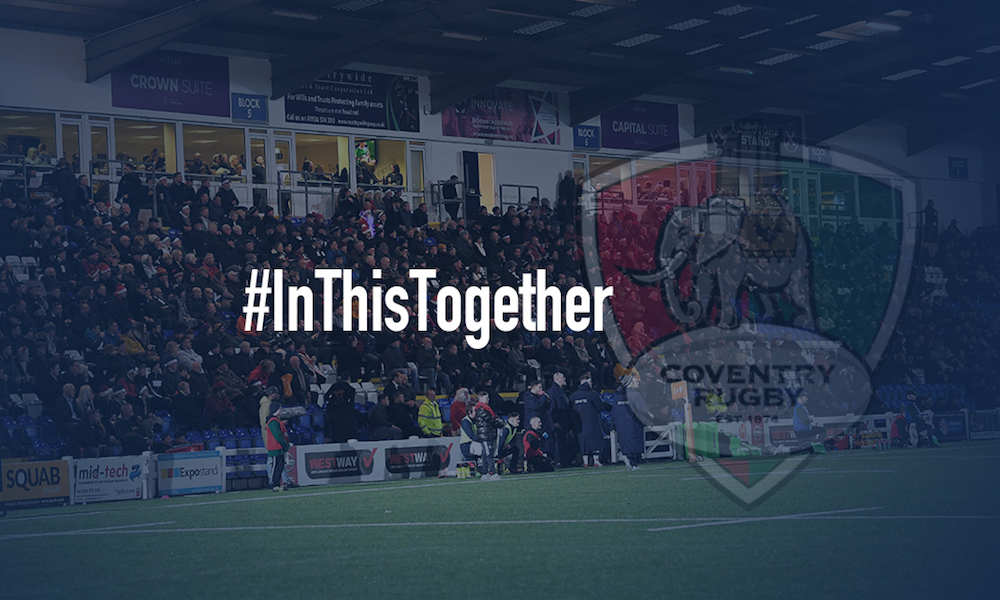 Coventry Rugby has today launched a petition on Change.org calling on insurance companies to be good corporate citizens in fulfilling their policies with the leisure, sporting and hospitality sector to help prevent hundreds of small and medium-sized companies from going out of business.

As with other sports, entertainment, hospitality and leisure venues, Coventry Rugby’s Butts Park Arena has been closed as the club follows advice to reduce the spread of Covid-19. We have had people at the club who have had symptoms and been told by 111 to self-isolate, and following the government’s clear guidance we have acted accordingly.

This alone has disrupted the club’s operations and cashflow, with Butts Park Arena a multisport hub used by organisations, junior clubs, schools and universities from across the Coventry area.

But it has been compounded by the Rugby Football Union now ending the 2019/20 season with immediate effect, and with four home matches now not being played – including the biggest of the season against league leaders Newcastle – there is a hole in the club’s budget well into six figures.

As with every other similar business, this situation has been outside the club’s hands.

The government’s announcement on Friday, March 20th that 80 percent of the wages of furloughed workers would be covered has potentially mitigated some of the impact, but the lack of cashflow is now putting the future of Coventry Rugby at significant risk, as despite the dedication of Executive Chairman Jon Sharp the club needs income to remain a going concern.

Coventry Rugby has notifiable disease insurance, but after having indicated that the business disruption would be covered the insurer is now preventing the club from making a claim as we cannot provide a test showing we have had a confirmed case.

With symptomatic people being told to self-isolate for a minimum of seven days and tests not being readily available this is impossible.

We either need the government to confirm that medical advice is acceptable evidence in the circumstances, or the insurance companies to behave as good corporate citizens when dealing with such claims.

The burden of proof should not lie with companies who do not have the ability to test through no fault of our own. We, along with hundreds and hundreds of other similar companies, pay thousands of pounds to be insured for this very scenario, and for the insurance industry to be relying on technicalities of this nature is unjust.

We are one rugby club. But if this is happening to us it is happening to other sports clubs, theatres, entertainment venues, restaurants, bars, clubs, leisure venues and many more small and medium-sized businesses across the country. Collectively we employ tens of thousands of people and are worth several billion pounds to the economy.

This is all now in serious danger of being decimated thanks to faceless technocrats within the insurance industry.

We call on not just our supporters, but anyone who is being impacted to sign our petition and show that those of us who have acted in good faith and in the country’s best interests need the insurance industry to fulfil their side of the bargain and be the good corporate citizens they profess to be.