Coventry Rugby and AnalysisPro – a sporting technology partnership in action 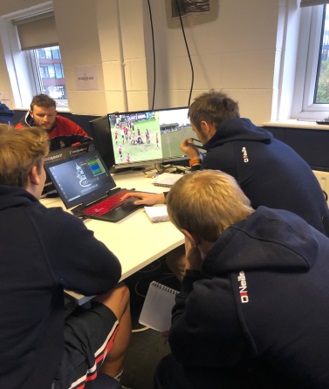 Matt Harland, Coventry Rugby’s head of performance analysis, has updated his blog to provide further insight into the club’s use of Nacsport and the analysis solutions available from AnalysisPro.

In particular, this second edition focuses on how the club’s coaches and players utilise the software on a day-to-day basis to drive forward performance levels.

“It’s important we have a system that works quickly and is easy for coaches and players to understand. I currently have two interns who had never used the software before this season, both of whom have picked it up quickly and play an important role in our analysis process, which we intend to further develop next season.

“All league games are stored on an online platform called Elitehub, along with an analysis file provided by the RFU which we download and use to speed up our opposition analysis. Nacsport can import both file types provided (SportsCode timelines or XML files), so we are able to quickly share this content amongst the team.

“These games are also uploaded to our online sharing platform and put on club laptops which have Nacsport Viewer on them so the players can access and review. This software enables players to put together presentations and pick out key clips that they want to highlight and discuss.

“We want the players to have an influential role in our analysis process, so making their time in the office as effective as possible is important. We also have a white board on which players put information about the opposition which is then fed into team meetings during the week. 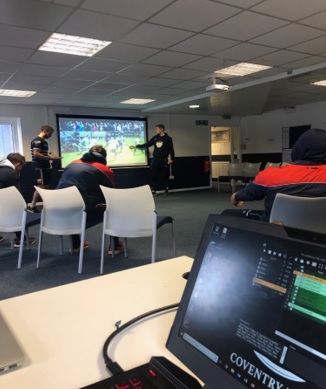 “From the RFU analysis, we use the Nacsport presentation window to pick out set-piece clips, with lineout extracts then being further categorised into setups which the players and forwards coach Louis Deacon are able to review. This enables us to put together ‘lineout menus’ looking at the opposition’s main jumpers and the setups they use most often in different areas of the pitch.

“We also use the presentation window to look at our opponent’s first-phase plays from scrums and lineout plus their phase play and defence style. Nacsport makes this really simple since our coaches can build up individual presentation files which are small enough to be emailed back and forth between them which really enhances the updating process.”

“One of our biggest developments this season has been made in the review and analysis of training. We decided to invest in a drone just before Christmas and this has played a big part in that development due to the different viewpoint it provides.

“With a few adjustments, we have a live feed from the drone going into a laptop with Nacsport Elite for live capture and review. We have also been trialling using this footage on a ‘live tagging’ basis to pick out coach clips or points that players are able to instantly review on the laptop during the session. 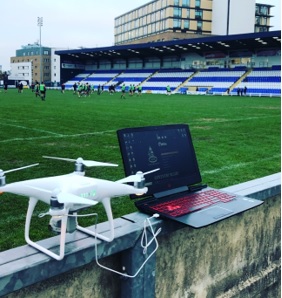 “With the amount of information we try to get across to players each week, the review process must be as quick as possible. Nacsport Elite allows us to scroll back through footage and review training live, which enables us to provide information to the coaches over the radio, which they are then immediately feed back to the players.

“As you can see from the pictures, we have a simple set-up since we train away from the ground, so our Avermedia capture device and Nacsport machine must be quick and easy to get into optimum working mode. We also film training from the side of the pitch to provide another angle, which is then tagged in Nacsport according to the coach’s training sheet for easier review.” 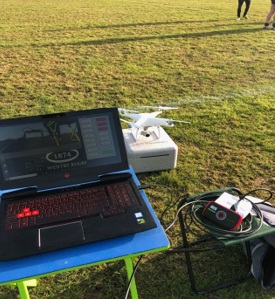 “On match day, we are provided with a tight angle which we capture via a HDMI cable into an Avermedia and then transfer into Nacsport Elite.  This is tagged live so we can provide instant real-time information to players and coaches, while coaches are also able to take away the match video and analysis straight after the game for review.

“At home games, we have an end-on camera plus an opposite side of the pitch view, which we sync after the game along with the tight and wide provided by the RFU, which means coaches have four angles available to them post-match.

“I use my customised Nacsport template which includes Panel Flows, Activation and Deactivation links to maximise available information in an efficient way during the game. This template is linked to a live Dashboard that constantly updates to provide in-game statistics across the 80 minutes. 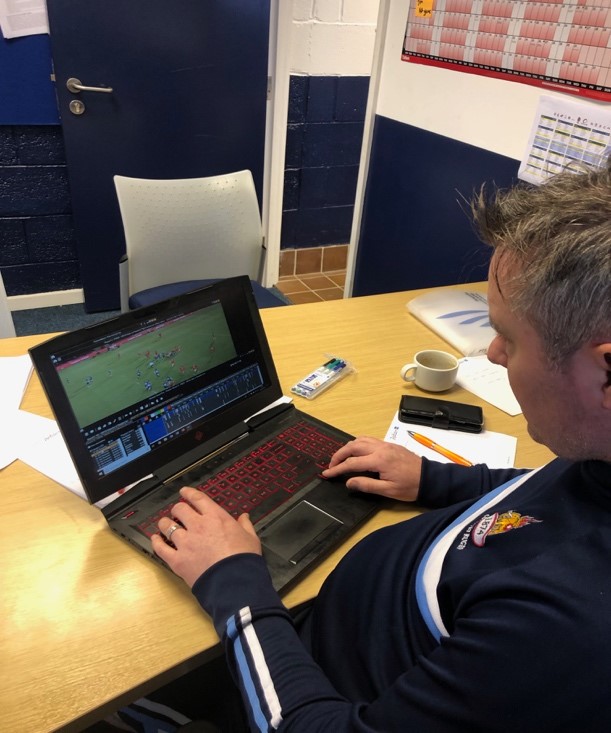 “The coaches sitting next to me have access to a laptop with Nacsport Coach Station on, which allows them to review the footage I am capturing either by scrolling back or clicking a specific clip.  Coach Station is a tool I am looking to utilise more during training, as we can use our AP Wireless network to wirelessly stream to a laptop or Surface Pro to allow further analysis review.

“Once the game has finished, coaches take away a package with an initial breakdown of the game (eg ball in play, lineouts, scrums and first-phase attack and defence). Footage is then reviewed again using different buttons to look at individual players’ attack, defence, work rate and set-piece performance. This analysis is then used to drive each player’s independent development programme (IDP).

“Our analysis set-up has come on a lot from where we were at this time last year. Matt has brought in new software which plays a key role in both preparation and review of matchday performance and training.

“The review process drives how we work for the rest of the week leading up to our next game. Having previously used pen and paper to note down clips or timings, using Nacsport has really developed our review process since it allows me to sit down with Louis and Matt and easily prepare presentations for the backs and for team meetings.

“Coach Station reinforces what we have seen live and helps us make the right decisions during a game. It enables us to compare what we are watching with our preview of the opposition and establish if they are playing the way we expected them to.” 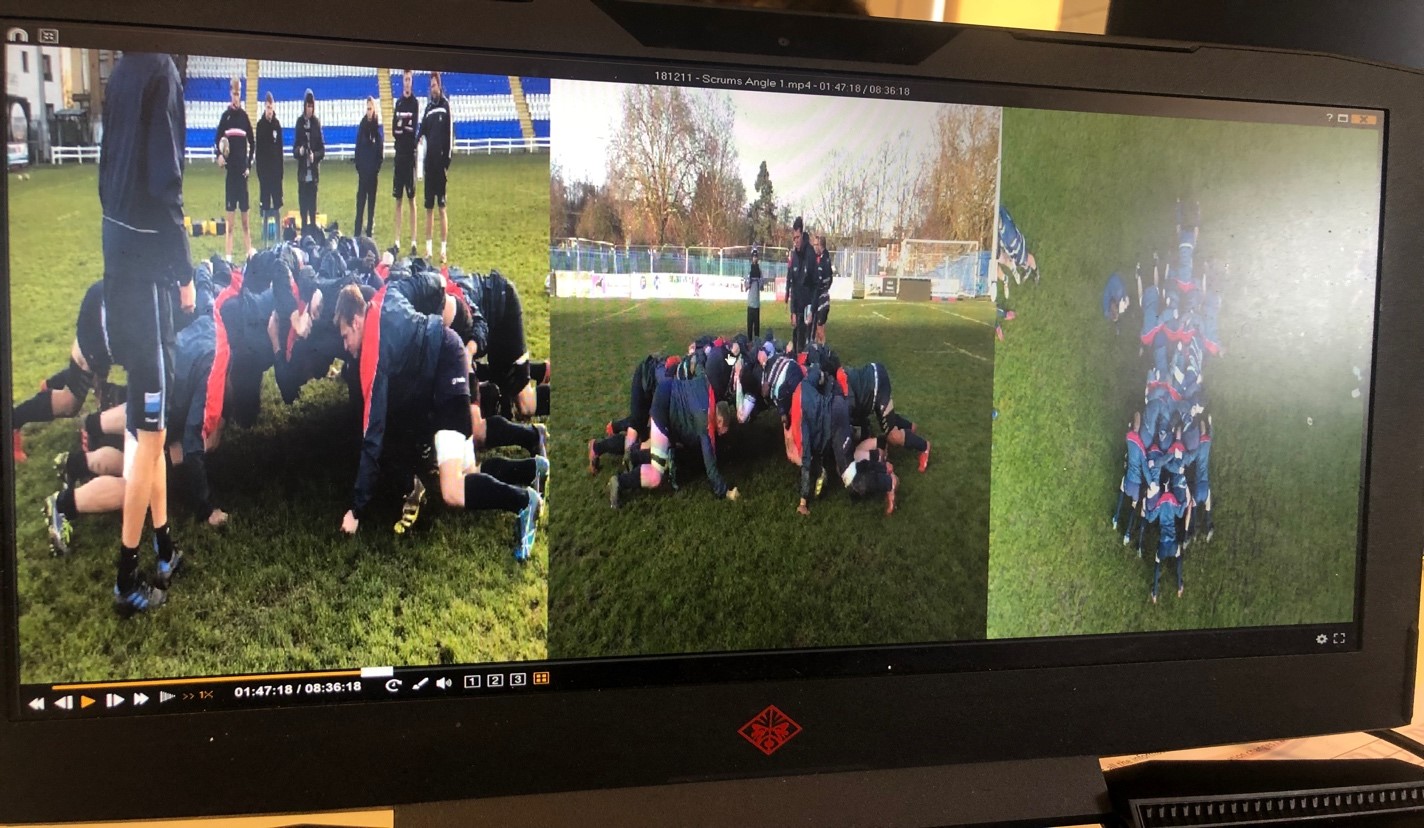 “One of our main objectives is for players to have an active role in our analysis process, so I challenge them to review opponents’ attacking and defensive lineouts and prepare clips for meetings. This analysis is an important factor in how we prepare.

“Matt and his interns put together packages of our opponent’s lineouts from the last three or four games, which are then tagged into our set-ups for the lads to review. Those players not involved in our matchday 22 then replicate these lineout setups against the selected team to aid preparation.

“These sessions are also filmed and tagged using the Nacsport Tag&view so players can review them post-training. The drone provides us with a third view of the scrums (both sides and above) and lineouts (behind the hooker, side and above).  Matt feeds back anything he sees from the drone by radio during the session, while Tag&view allows players to quickly review scrums or lineouts from that iPad angle.”

“We are constantly discussing how we review training and matches and by further integrating Coach Station we will allow the players to play an ever-growing role in this review process.

“The support, answers and advice we get from Josh, Jon and the team at AnalysisPro have been a great help as we continue to develop our partnership with Nacsport.”