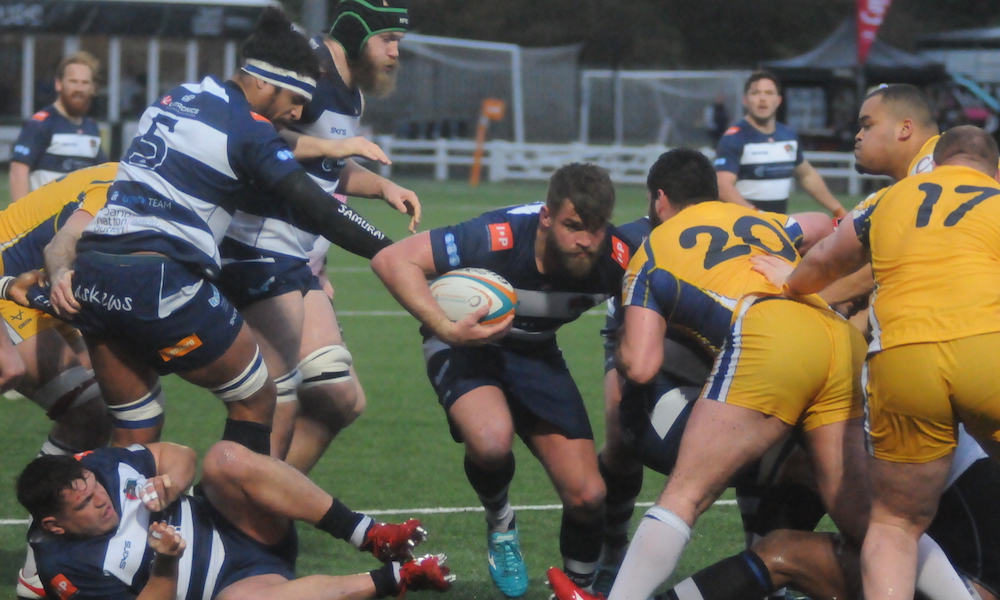 Coventry Rugby ended a tough week with an emphatic eight-try, 50-point win over Yorkshire Carnegie in front of nearly 2,000 supporters, a superb turnout considering the weather.

The funding news from Twickenham presaged the arrival of Storm Dennis, which swept through Butts Park with consistent strong winds and regular squalls of rain, but this did not stop Cov’s hallmark ambition with the ball being spread wide regularly.

Indeed, with Carnegie opting to play with the wind in the first half Cov’s positivity sometimes edged into over-ambition with the ball hitting the ground after one or two ill-advised offloads.

But in the second half they reined in the 50/50s, turned on the power and put the game to bed with some well-worked scores.

The strength of the wind was shown by a Jack Metcalf kick which sailed from the Railway End 22 all the way to the dead ball line at the other end of the field. Dan Lewis touched down, but the ball had glanced off a Cov hand on the way through and when the visitors were awarded a penalty at the five-metre scrum Joe Carlisle kicked the opening points.

However Carlisle then put Carnegie in trouble with a kick from just outside his 22 which this time went unabated to the other dead ball line. This gave Cov a scrum platform from which Senitiki Nayalo made metres, and when Carnegie killed the ball up stepped Rory Jennings to tie things up.

When the kick off went dead off Carlisle’s boot it gave Cov another promising position. This time it was Tom Kessell who made the half-break, the move ended by a Darryl de la Harpe interception.

For the next 15 minutes Cov gradually took control but could not turn their opportunities into points. There was a break by Ben Nutley, some nice interplay from Kessell and Jennings, and a kick ahead which just eluded Nayalo.

Ryan Olowofela was also denied a debut score by a penalty in the preceding passage of play and a 30-metre break from Rob Knox which put Cov onto the front foot.

Carnegie’s only threat came from a Tom Varndell long-range opportunity after a turnover. But instead of pinning his ears back the former England man opted to kick, and even the ball stayed infield to force Dan Lewis to sweep up the next yellow shirts came into the side of the breakdown to concede a penalty.

Cov’s breakthrough came in the 26th minute thanks to Andy Forsyth’s interception and run-in. Jennings had no trouble with the conversion from in front of the sticks, which he repeated two minutes from the break after a chargedown of a Carlisle clearance rebounded to Tony Fenner for a straightforward stroll to the line.

The 17-3 half-time lead was a fair reflection of the play, with Coventry not having been able to capitalise on their superiority.

But when Kessell tapped a quick penalty to extend the lead two minutes after the re-start it opened the floodgates and Cov did not look back.

Now 24-3 behind Carnegie were forced to play from deep, and when a Varndell offload rebounded to a Cov hand and a deft chip from Dan Lewis pushed Carnegie back to their own line the pressure soon told.

Strong defence forced a fumble and a Cov scrum on the five-metre line, and after repeated phases on the line Kessell squirrelled over for his second.

Try number five came just into the final quarter. A 20-metre maul took play all the way to the line. The penalty was almost an inevitability, and when this, too, was taken quickly it handed George Oram his first try of the season.

Regular changes from the bench did little to slow Cov’s momentum, and having seen Kessell grab two his replacement Pete White soon got in on the act, creating one score for Will Owen with a chip over the top that could have been finished by either Owen or his centre partner Knox.

Then White had his pair, both coming from dexterous handling from forwards Nayalo and Oram, who showed good awareness to find the scrum-half with good offloads.

The second of these both took Cov over the 50-point mark and brought the final whistle.