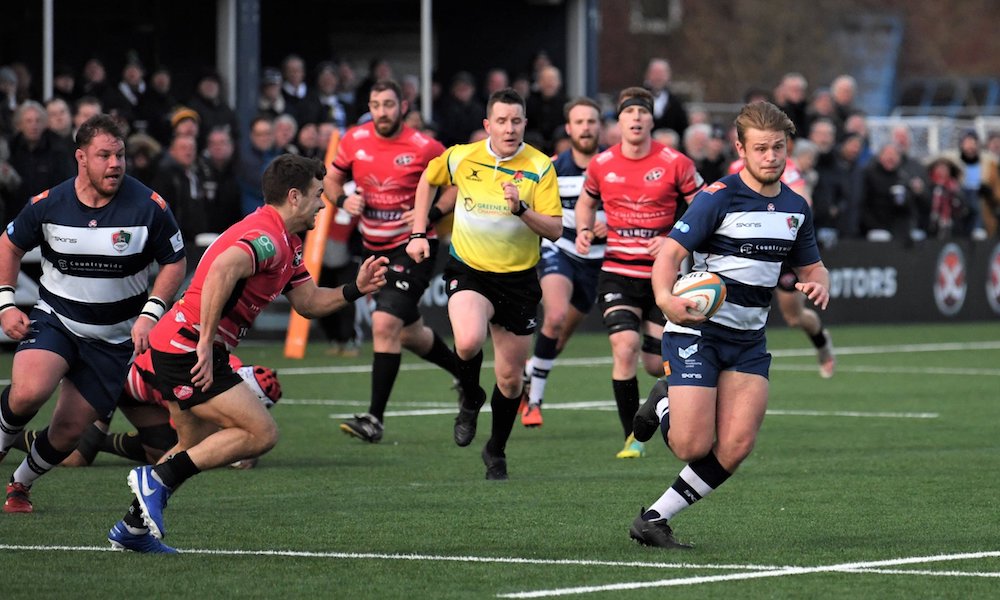 The nail-biting finishes continued yet again as Coventry Rugby’s irresistible second-half momentum brought them from an 11-point deficit to a Greene King IPA Championship win over Cornish Pirates.

The high-flying Cornishmen came to Butts Park Arena on the back of a six-game winning stream and second place in the table, and their confidence showed during a first half which they led throughout.

The early stages of the game were stop-start as a result of poor discipline from both sides, with Rory Jennings and Javier Rojas Alvarez trading penalties.

More penalties gave Pirates some go-forward ball and a break from Kyle Moyle put them into Cov’s 22. From here the visitors pack took over to put them within touching distance and centre Callum Patterson crashed over for the game’s first try.

It took until the end of the first quarter for Cov to get a real foothold into the game, when they began injecting some pace through their attack. This change saw the home side put real pressure on the Pirates defence, forcing numerous infringements in and around the breakdown.

Cov chose to go to the corner on a few of these occasions, attempting to break through with their maul, but Pirates managed to stymie these opportunities, despite losing Dan Cutmore and then Patterson to the sin bin.

A sole Jennings penalty were Cov’s only points during the sin bin periods, the half ending with a 9-13 deficit.

Four became 11 three minutes after the restart, when a Moyle break and strong work from the forwards brought a try for loosehead Jack Andrew. With the score close to the sticks the conversion was a formality for the league’s top points scorer Alvarez, and despite there being plenty of time to play the nerves around Butts Park were palpable.

But Cov remained patient, and three minutes later they were over the line for the first time. Ryan Burrows set out his stall for the second half with a superb break, and with the ball kept alive Jennings was over by the uprights.

The Pirates’ crucial decision came after 53 minutes. Antonio Kiri Kiri had been their main man at the breakdown to that point, but following his substitution the visitors lost their dominance. And with Cov also getting on top in the scrum all of a sudden the pendulum swung in their favour.

This was rewarded by Luke Wallace’s first try in Cov colours, cutting a good line to the uprights after the forwards had inched their way to the line, dragging in defenders in the process.

These tries were good, but they were eclipsed three minutes into the final quarter by James Martin, who marked his debut in spectacular style. The Academy youngster had scored 12 tries in his 16 appearances on loan at Cambridge this season, and he showed his confidence by turning on the afterburners and scything past one defender after another to the whitewash.

It was an effort which earned him man of the match honours, and took Cov two scores clear in the process.

Another Alvarez penalty pulled the visitors to just five points down, and when a late penalty was sent to touch the scene was set for another thrilling Butts Park finish. The Pirates inched their way closer with ruck after ruck, but the blue and white line did not just hold, it also won a penalty to bring the 2,786 crowd to its feet to hail another home win.