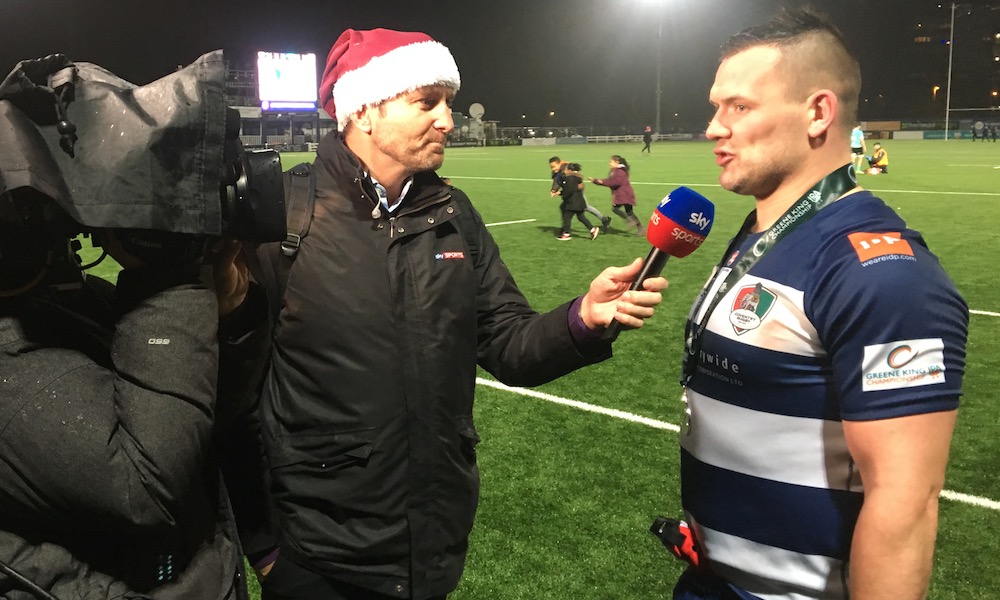 Coventry Rugby saw off Nottingham in front of the biggest crowd at Butts Park Arena since the club returned to the Greene King IPA Championship to go second in the table – for Saturday night at least – and get back onto winning ways.

Tries from Nile Dacres, Joe Buckle and Scott Tolmie rewarded the attacking effort, with just one try conceded, but having the bonus point remaining elusive, despite a thrilling passage of end-to-end play which continued for eight minutes after the 80, reflected Nottingham’s competitiveness at the lineout and a few other positions which were not turned into points.

The visitors lived up to their long-held reputation for effectiveness at the lineout, spoiling a number of Coventry throws, but in other areas the home eight were well on top, not least in the scrum.

It took 10 minutes for the first scrum, but it was worth waiting for as Cov turned on the power to win as clean a shove against the head as you’ll see. And it was a similar decimation of the Nottingham pack which brought the second try. Man of the match Ryan Burrows carried hard, not for the first and definitely not the last time, with Buckle on hand to crash over by the posts.

Coventry’s first may have been finished off by Dacres in the corner, but it was set up by some outstanding attacking play from forwards and backs alike. Burrows and David Halaifonua made powerful bursts, with Buckle and Ben Nutley taking play into the 22. Cov retained possession, went through the phases and created the space out wide.

Nottingham’s best chance came right at the end of the opening quarter, Shane O’Leary sending a penalty to the corner. But the forwards messed up the trick play to the front and Cov cleared.

Nevertheless O’Leary did get Nottingham on the board with a pair of first half penalties, the second of which sent the teams to the sheds with Coventry leading 15-6.

Jennings’ second penalty extended the lead into double figures, which was extended in style by Scott Tolmie, who powered over 90 seconds after coming on as a replacement. Coming quickly from the top of a lineout, Burrows stormed through the centres and a couple of passes later Tolmie was over.

Nottingham pulled a try back just past the hour, Luke Cole coming up with the ball after a maul gathered unstoppable momentum in the corner, and while that was the end of the scoring it was by no means the end of the action.

Seb Cecil’s yellow card for killing the ball during a dangerous Coventry attack set up a superb position for the hosts. A penalty was turned into a scrum, but when a subsequent free kick was tapped quickly and fumbled it handed possession back to Nottingham, who cleared.

Then with the clock ticking past the 80 and Nottingham pressing for a losing bonus point of their own all of a sudden Andy Forsyth had the ball and was clear up to halfway. Pete White was the first player in support, and with the blue and white shirts swarming forwards it seemed inevitable that the 3,000-plus crowd would be sent home with a fourth try to cheer.

Unfortunately it was not to be, but nevertheless Coventry headed into the festive season in fine spirits.