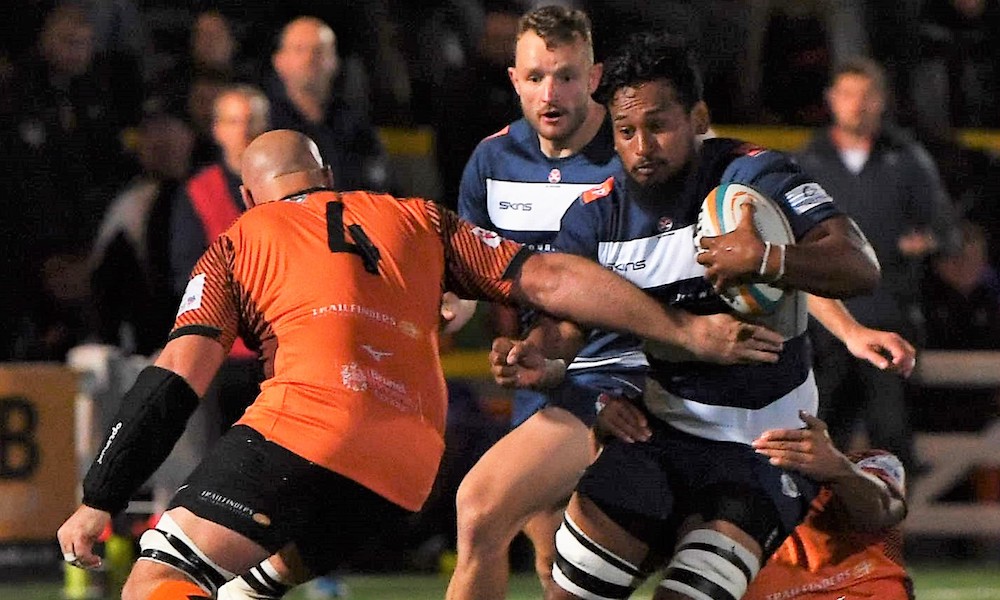 Jack Ram was back in action

Coventry Rugby’s team of youngsters came from behind and then showed good character in the final 10 minutes to see off the British Army 22-21 at Butts Park Arena.

The one-point final margin reflected the balance between the teams, Coventry edging the try count four to three but the Army putting together plenty of dangerous attacking phases of play.

Both teams set their stalls out early, Senitiki Nayalo breaking off the base to feed Jon Davetanivalu from a scrum, while the hosts worked their way into the visitors’ 22 on a number of occasions.

Kalius Hutchinson made a strong break and there was a chip from Dan Lewis aimed for James Martin that Owain Davies did well to catch under pressure. Louis Brown also caught the eye with his running, and while there was an ill-judged inside flick from Will Flinn which handed possession back to the Army back came Cov, and this time there would be no mistake.

Brown put Morgan Dayes down the left wing with a nice offload, and when the play went right Martin juggled and sent Paul Wells over to open the scoring.

Cov had had the most of the play so far, but as the first half wore on the Army steadily worked their way into the match. Scrum-half Tom Chennell offered a threat around the fringes, and their defensive set-up with a couple of sweepers stopped the threat of a chip over the top.

There was a big tackle on Brown from Davetanivalu, and a break from Giles Bromley-Martin which should have brought a try. Davetanivalu was available but Bromley-Martin opted to step the other way, and after Brown pulled off a must-make tackle the rest of the blue and whites were not far behind to eventually win a lineout close to the home line.

The lessons were learned quickly as the Army struck twice with two tries in as many minutes. Davetanivalu juggled and powered through Martin on the right following a good period of running and passing, followed over the line by wing partner Jake Richards, who was in the right place at the right time to finish off an Owain Davies break.

The powerful right-left combination could have been followed up by a knockout uppercut, but for try saving tackles from Brown on Davetanivalu and then Hutchinson on Chennell in the next phase.

Then when a penalty for an off-the-ball incident brought an Army lineout and driving maul in the home 22, a third try looked inevitable.

That was until some superb work in the middle of the drive won the ball back, and when Flinn and Lewis chased the scrum-half’s kick ahead it forced mistakes from the Army rearguard and eventually won a penalty by the sticks. Flinn tapped quickly and Scott Tolmie found Martin for a spectacular finish in the right corner.

Trailing 10-14 at the break Cov would have been back in front had David Langley held onto a pass with the line at his mercy. But then the Army could also have extended their lead but for a superb tackle from Martin on Nayalo.

Richards fumbled with wide open spaces in front of him, too, meaning that Cov had a fantastic position to build from deep in the visitors’ half. This became even better with an Army offside on their own line, and as the pressure built the numbers ran out and Dayes was on the end of a Lewis pass to score.

This put Cov into the lead for the first time since the mid-point of the first half, and when Nayalo was sin binned for pulling a maul down close to the line the hosts capitalised almost immediately, Brown crashing over for a deserved score.

But the Army were not intending on going away quietly, and when Lloyd Wheeldon went through a gap to sprint clear and over it put the game back in the balance, especially with Dixon judging the wind superbly for the conversion.

With 10 to play, the score 22-21 and Nayalo back from the bin to continue causing havoc with his powerful running and good hands, the scene was set for the Coventry youngsters to learn some good lessons, whatever the final result.

Game management is one of them, especially in possession in the opposition half, and some of the Cov play with ball in handed was somewhat frantic. But while the Army caused the defence to bend, and Nayalo had a breakaway pulled back for a fumble in the build-up, the hooped line refused to buckle and the hosts held on until the final whistle.