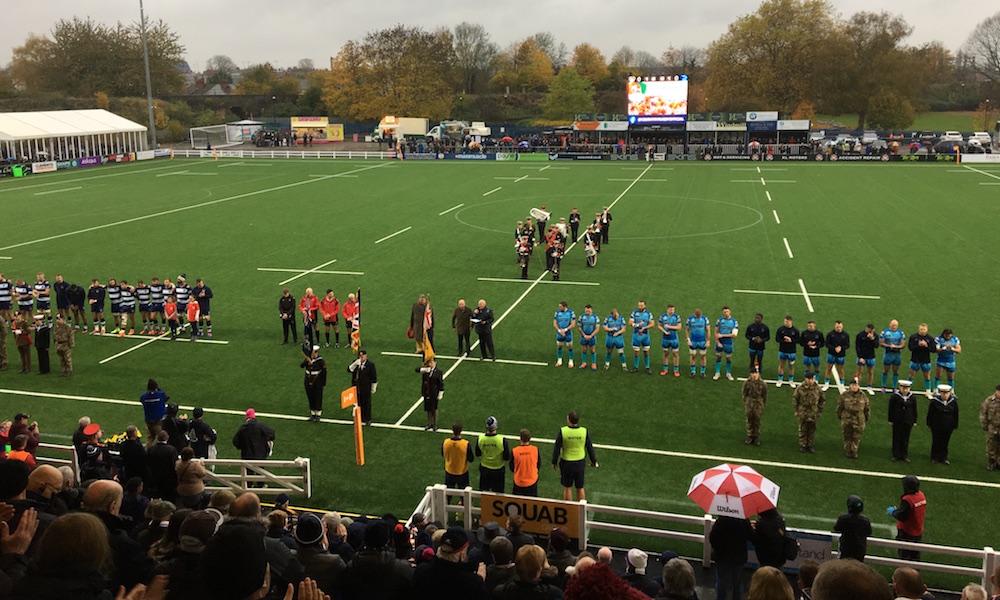 A try in each half from Joe Buckle and Max Trimble and steady performances off the tee from Will Maisey and Rory Jennings were enough to see Coventry home against Doncaster Knights.

Doncaster got off to a good start, Sam Olver kicking a fourth-minute penalty, and while he missed a second shot from long range so did Rory Jennings, and with 10 minutes on the clock the Knights still had a three-point lead.

But it was a Coventry attack from deep which both belied the conditions, brought the crowd to life and ultimately brought the first try.

By shaping for a box kick Tom Kessell lulled the Knights defence into a false sense of security, creating space to combine with David Halaifonua up the right touchline. Trimble was then sent away up the left and when play came into midfield Robin Hislop’s dangerous tackle had the prop in the sin bin and Coventry deep into Doncaster territory from the penalty.

The first lineout was driven so well that Doncaster had little option but to pull it down, and when Cov went back to the corner the were rewarded by the try for Buckle, the hooker marking his first Greene King IPA Championship start in the ideal way.

Unfortunately a similar position just after the sin bin period finished came to nothing, and with Doncaster competing well at the lineout a steady stream of possession was hard to come by.

One area where Cov had dominance was the scrum, winning a number of penalties regardless of who was putting the ball in. One such effort in the 22 was rewarded by Will Maisey on the half-hour, nullified in kind by Olver three minutes later, and the two-point margin remained until the break.

Doncaster had played precious little rugby with ball in hand in the first half, but in the opening salvos of the second they ran hard and straight and made good metres in the process.

They came close to a score as well, but this was created by some inaccuracy from the hosts after Trimble had gone the long way round to try and find space. Doncaster disrupted the breakdown and hacked ahead, but the slickness of the pitch took the ball dead and the chance had gone.

The deadlock was broken by a long-range Jennings penalty, but it was a lovely piece of skill from replacement Pete White which sparked the game back into life. Given the heavy and incessant rain it was little surprise that the ball was seeing plenty of air time off the boot, but when White spotted the Knights defence up and plenty of space behind he dinked a chip into the 22 for Trimble to score.

White then had an interception try ruled out for starting from an offside position, and now facing a 12-point deficit Doncaster were forced into trying to play more positively.

But playing while trying to score is one thing, defending with a healthy lead is another, and the Cov rearguard stepped up across the field, none more so than with a defending maul which drove Doncaster back a full 10 metres from what had been a dangerous attacking position.

And it was this combination of opportunistic attack and aggressive defence which ultimately took Coventry all the way to the final whistle and another four Greene King IPA Championship points.