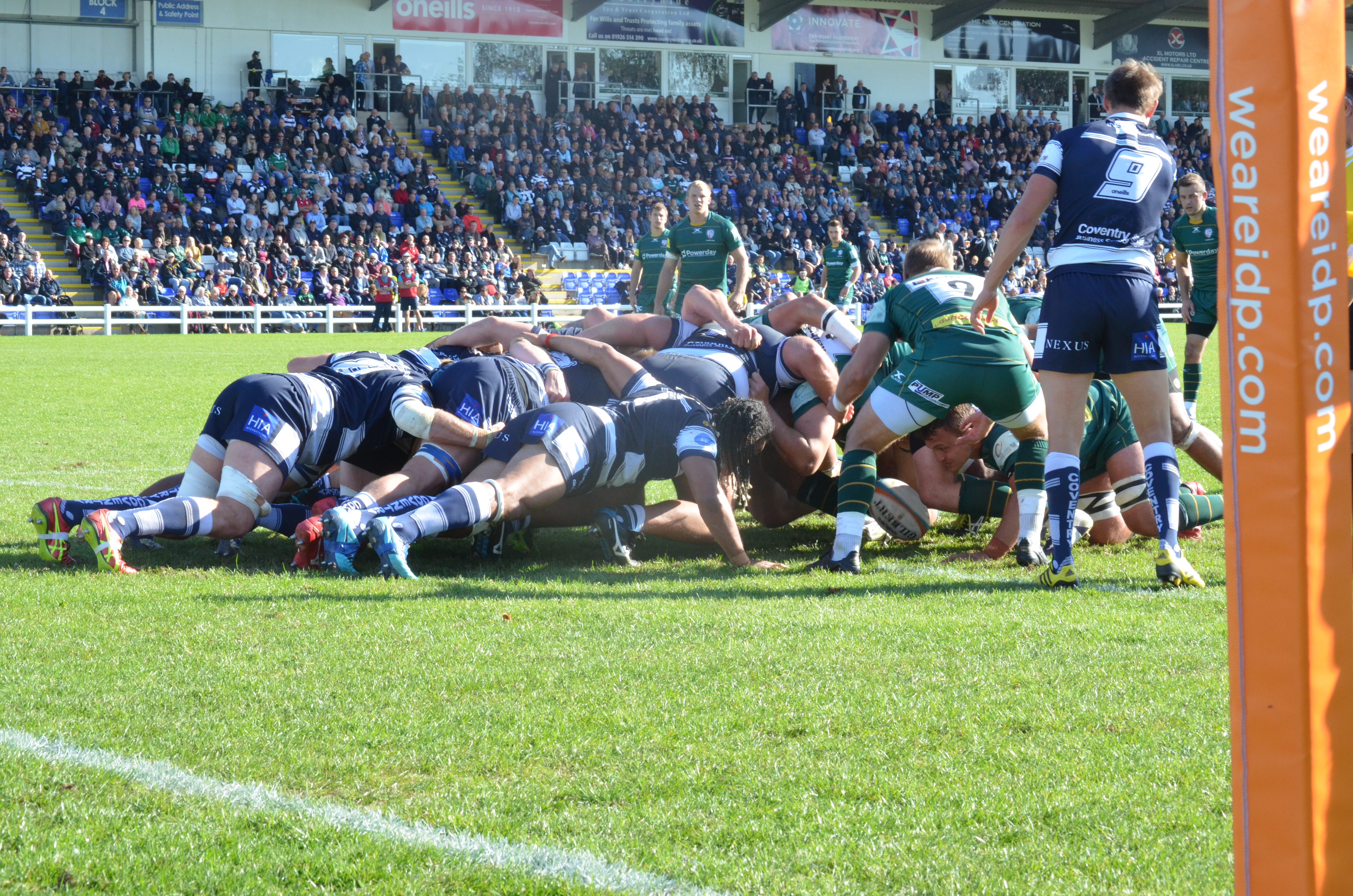 In front of a packed and vocal Butts Park Arena, Rowland Winter’s team led an absorbing battle for periods of both halves.

Ofisa Treviranus made early headway for Irish, only for some determined defence under the home posts to turn possession over.

Cov then took play into the Exiles half, where strong carries from both centres and Jack Ram eventually led to a penalty which Jake Sharp converted into three points from 25 metres.

Irish hit back through their forwards, who sent hooker Porecki powering over from a set move at a five-metre attacking lineout.

Myler converted, but with Cov’s front row on top and their defensive line-speed and combative breakdown approach forcing regular errors, there was little between the sides at the end of the opening quarter.

James Voss and Ram then both made powerful bursts through midfield, after which the blue-and-whites took the lead as Tuitupou twisted out of a tackle and raced over from 30 metres following a lineout.

Sharp’s conversion gave the hosts a narrow advantage, which they kept intact until the break through some good scramble defence following breaks from Tom Stephenson and Tom Parton.

Soon after the restart, former Northampton No.10 Myler brought the match level with a penalty won by his front row on the home 22, after which is required some quick thinking from Andy Bulumakau to foil Parton’s chip-and-chase close to the home line.

A repeat performance from the Exiles pack and Myler’s right boot then edged them back in front before Cov twice threatened with ball in hand through James Stokes – after some good continuity – and replacement Jack Preece.

The hosts thought they had sent David Halaifonua on his way to the line, only for the former Gloucester flyer to be recalled for an earlier forward pass.

But as they shifted the territorial balance from their own half into away territory at the start of the final quarter, the home side did soon claim a second try through Scott Tolmie.

The replacement hooker was driven over by his pack after Sharp declined a kick at goal in favour of a five-metre attacking lineout.

The home No.10’s excellent conversion gave the hosts a four-point advantage going into the closing stages, but the concession of a penalty on halfway proved crucial.

Irish proceeded to pin Cov in their own 22, from where a well-executed backs move sent Macken sprinting over on a slicing diagonal run.

Myler’s missed conversion left the visitors with the slenderest of leads. However, when his pack claimed a lineout turnover then marched a maul 25 metres into the home 22, he made no mistake with the resulting simple penalty.

This left Cov with enough time to create two half-chances, but neither delivered the score which would have sent nearly 3000 enthralled supporters home happy.