An impressive record indeed, and 24 adding on the eight from the end of last season.

In truth, Old Albanian – one or the two sides to deny Cov a try bonus point earlier in the season – were never really in it. They battled, with a number of injuries early on certainly not helping their cause, but overall Coventry had far too much class and power which ensured they were never seriously threatened.

With all the heavy rain and winds leading up to the game, the expectation was the pitch would cut up considerably. However, and as a credit to the work of Eric Richardson, it played remarkably well. Understandably heavy, but not cutting up to the extent envisaged.

A really stop-start beginning saw OA hit early problems, flanker Andy Christie being helped off in the opening minutes. Several other visiting players also picked up knocks, to the extent that OA had used four replacements before half time.

Those factors, however, should not be allowed to take anything away from this latest Coventry win which, with Darlington MP and Plymouth Albion not in action, saw the lead at the top of National One open up even further to 18 points.

With early penalty awards largely going Cov’s way, it took until just the seventh minute for the opening try to come. Actual playing time at that point had been much less.

Tony Fenner pumped a kick straight into the Albanian 22 and when the forwards were held up and possession released, Cov’s No.10 skipped over before converting the try himself for 7-0.

OAs were already experiencing real line-out problems. In the first half alone, several throw-ins were deemed crooked while overall Cov claimed at least four others against the throw.

After George Oram had taken out such line-out possession, the returning Pete White cleared superbly before the scrum-half added the second try. On 16 minutes, a rebound off a visiting player went straight to White whose pace then took him diagonally for the try wide out, Fenner missing the conversion.

All the serious attacking was coming from the unbeaten leaders, despite a yellow card for Oram for a mistimed challenge, and after Fenner had again pegged OA back, nothing was going to stop the impressive Latu Makaafi as the flanker was driven over, Fenner converting successfully for 19-0 on 21 minutes.

The line-outs were proving a real problem for the Hertfordshire visitors, Brett Daynes leading another impressive charge from that area of play.

Cov were certainly not sealing all the chances that came their way, James Stokes’s hands letting him down when another opportunity arose.

Little had been seen of Old Albanian as an attacking force, but briefly just before half time they found a way into the home 22.

It was to prove to be very brief, Stokes snapping up an interception and although fairly tight in on the East Stand touchline, Cov’s full back took off to beat any attempt to stop him from fully 80 metres to seal the bonus point try, with Fenner adding the extras.

With all the accumulated stoppages, there was still time for Cov to be denied twice more.

First, Fenner led a big breakout before the move broke down, and then when centre Fraser Dingwall cleverly chipped through, Max Trimble was only denied the try after referee Tom Davis had consulted his assistant, it being deemed the correct downward pressure had not been applied.

At 26-0 though and into the second half, they key question really was, how many more points could Coventry add, whilst bringing up their 100th try of the season?

Another line-out was stolen with Trimble again making hay down the left, although early minutes of the half were just a little messy.

All the meaningful pressure was coming from the Blue & Whites, and after yet another Fenner penalty kick into the visiting 22 had set up the position, the 100th try was to follow.

Pressure built and from it, White burrowed his way over for Fenner to again convert, leaving Cov truly out of sight at 33-0.

Fenner added the conversion to take the tally to 40 points.

Two minutes later, and the only real moment when OA looked like scoring, a measured build up saw replacement scrum-half Ross Parsons cross, the conversion attempt barely rising above the ground.

There was still time for Cov to add tries seven and eight.

On 78 minutes, when fed near halfway, the pace of Trimble took him well clear, followed deep into injury time by Olly Povoas, the sponsor’s man of the match, crossing under the posts after a five-metre scrum. Fenner added a sixth successful conversion, giving him 17 personal points in the game.

The visit to old rivals Blackheath comes up next Saturday, but with it, Coventry can surely take to their 2018 travels in the knowledge the end of year break has done nothing to harm their form or confidence. 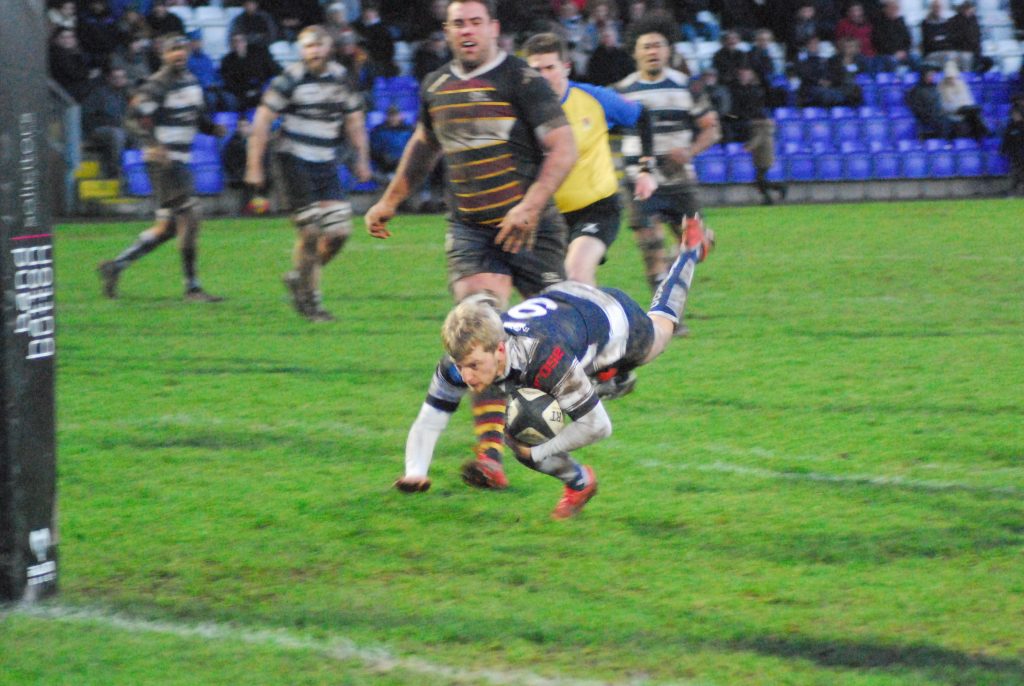