COV Kid Ben Palmer is returning to his home city club where he will link up with his brother Josh, who is included in the first list of Gold level players named in Coventry Rugby’s new Development Academy.

Fly-half Ben, 25, joins from National League One rivals Old Albanian where he made 27 appearances last season and scored 173 points – including 22 with the boot against Cov in a high-scoring game at Butts Park Arena.

He has also had National League experience at Broadstreet, following a spell with North Otago in New Zealand after his first stay at Cov, and then Henley Hawks.

“Fly-half is an area where we’ve lacked cover and signing Ben is similar to Phil Nilsen’s recruitment at hooker,” said director of rugby, Rowland Winter.

“We’ve been lucky that we’ve had two very good fly-halves who were durable and robust last season, but towards the end, with Tony Fenner injured and Will Maisey holding on, it was an area where we were quite vulnerable so we needed a third 10.

“Ben is a local, Coventry-born player and has plenty of National One experience – his display at Butts Park when he kicked us off the pitch a little bit was impressive – and we jumped at the opportunity to sign him so he can put pressure on Tony and Will.

“He lives and works in Coventry, he was driving past the ground all last year to go to Old Albanian, his brother Josh is part of the development squad, so it’s a good opportunity for him and I think a key thing is that, similar to Will signing last year, he has developed significantly since he was last at Cov.

“Part of this summer’s recruitment, especially the younger players like Ben, is to have local players joining the club who can make the most of the strong coaching team we have got and develop as home-grown players.

“Ben is a year or so ahead of some of the Gold level development players, but he’s very much on the same pathway.”

Gold level players in the Development Academy will train with the senior squad on Mondays and – all with experience of the A League, National League One and Two, England Counties Under-20s or Premiership clubs – come under the tutelage of head of development Matt Price, whose appointment was announced in March, and Brendan Burke as head coach of the Development Academy.

Said Winter: “The Gold group of players are numbers 30 and upwards in the senior squad and are players we feel are of National One or Two standard who will step up through the season.

“The Development Academy players will figure in our Zoo Shield games each week alongside eight or so players from the senior group.”

Zoo Shield games will be played on Saturdays with fixtures to be confirmed at the end of this month. In addition, there will be some midweek development games.

Included in the initial draft of Gold players are Jake Byrne, Willie Priestley, Cameron Gray, Sam McNulty and Josh Palmer, who were all part of last season’s development squad, along with James Neal whose arrival from Hartpury College was confirmed earlier.

Kwaku Asiedu – winger, from Hartpury College where he has completed a Masters degree. Played for England Counties under-20s and England Students, and has National League experience with Canterbury.

*Max Hartman has been appointed head of strength and conditioning with Rob Norman leaving the club.

“Rob has been an important part of the team for a number of years and we wish him well with his next venture,” said Winter. 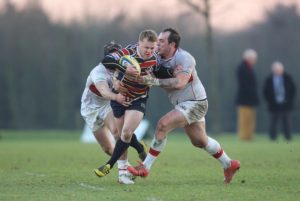