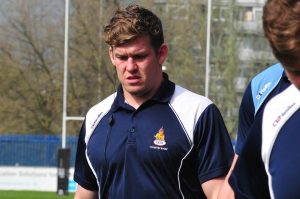 Narraway, 34, joined from London Irish in June 2017 and took on his first coaching role with Coventry, leading the defence whilst continuing to play 24 times in the title-winning season.

Director of Rugby Rowland Winter recognised the opportunity for Narraway but concedes that its disappointing to see him move on.

He said: “Although it’s unfortunate that we lose him, it is a great opportunity for Luke to challenge himself at a higher level as a coach in the Top 14.

“Over the last few days we have agreed terms to release him from his contract, and we wish him the best of luck.

“He has had a great impact on the club as a player and has shown his leadership and experience consistently to contribute to our successful season.

“Off the pitch as a new coach, he has worked hard with the support of Nick Walshe & Louis Deacon, to add clarity and detail to our defence, which has laid strong foundations for us to now build on.

“It continues to show that the National Leagues can be a great stepping stone for players and coaches to learn and progress. We now have a great opportunity to reshuffle the coaching team a little and strengthen the playing squad further ahead of the new season.”