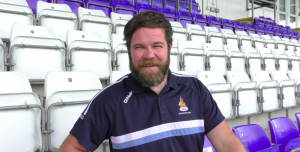 CoventryRugby are delighted to announce that Ben Gulliver and Sian Haynes will make up the new Community Department at the club.

Gulliver returns to the club having spent time at the Blue and Whites as a player whilst Sian Haynes joins from Gallagher Premiership club Northampton Saints.

The 37-year-old who joins his father Tony Gulliver at Butts Park Arena admits he is excited to work alongside his old man.

He said: “Working alongside my dad is exciting, we are more like brothers than father and son and we have both had a long affiliation with the club.

“I know the importance of the club to the city, working with dad, watching him play all of his games and I went on to play 100 odd games having been a ball boy for the club.”

Gulliver admits he was lured back to the club where he began his professional playing career because of the feel-good factor that surrounds Coventry Rugby ahead of their Championship return.

He said: “It has been quite a long time coming, it feels really good to be back, it feels quite natural. I left in 2004/2005 when the club were last back in the Championship and my rugby career has taken me on its own pathway and I’ve always looked to get back involved with Coventry Rugby.

“It just feels like the club are in the right place, it’s really ambitious. It’s a pleasure to be back on board and around an exciting environment.”

Having made 210 appearances in the second tier of English Rugby, Gulliver has now ventured into his role with Coventry Rugby and explains what his job entails.

He said: “Coventry Community department has been up and running for a little while now and it’s in a pretty good place, but we are looking to kick on with what’s gone on at the club before and start a new era.

“Sian Haynes is onboard who has lots of experience from Northampton Saints. We are looking to get ourselves with local schools and all local junior clubs and offer matchday experiences for youngsters and for everybody else.

“We are looking to add in a fan zone with lots of activities for the children, a masterclass on the day where schools will come in and have the opportunity to be coached by first team players and coaches.”

“Both myself and Sian have had lots of experience with community departments, Sian has 20 years at Premiership level, so we will be looking to follow Sian’s knowledge. My knowledge previously, I spent a lot of years as a player in the Championship but also was fortunate to do a similar role whilst at Bedford Blues.

“It’s all about engaging with everyone in the community, we are here for the community and I think it’s important for them to know that, any requests or things that they would like at a school or a local sports club need a coach or would like one of the players to pop down then it’s not a problem, we are here to help.

“What I have noticed in the short amount of time that I have been here is that the players receptive to it all, they just want to help. They see where this club is going, and the ambition of the club and it is about using those guys to engage with everyone from the community.”

A reminder that the club are holding a Rugby Camp at the end of August that will include live sessions with first team players and other fun activities.

Gulliver added: “The Rugby Camp is on the 29/30thAugust, we are starting a new era, it is the last week of the school holidays. It’s going to be a pre-season camp, it will entail lots of fun activities, lots of stuff that fits the whole rugby player, a lot of multi skill events. Post camp, we have a huge focus on our Wasps home game and then Jersey at home.”