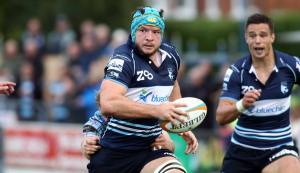 The 28-year-old comes to Butts Park Arena off the back of an impressive two-year spell at Goldington Road and re-joins Director of Rugby Rowland Winter.

The versatile back-row forward was brought to England by Winter in the 2015/16 season at Cambridge, having impressed playing International 7s for Australia and in the NRC for Queensland Country.

His power and skill earnt him the Player of the Season accolade as Cambridge won promotion to National League One. Adams’ performances that season then led him to Championship side Bedford, where he excelled in the second tier of English rugby.

The Australian has spent the last two seasons with the Blues and Winter admits he is delighted to reunite with Adams and bring him to Coventry.

“I’m really pleased to bring Ben to Coventry and to be working with him again. He will be a great addition to our team and club, and I know he will create fierce competition for a shirt in a number of positions.

“Ben is a hard-working and skilful player who is comfortable playing across the back row, and he now has a lot of experience of Championship Rugby.”