‘Being the First Team Manager is the next best thing’ – Gulliver 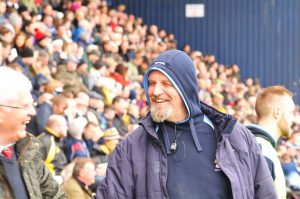 Coventry Rugby stalwart Tony Gulliver reveals why he re-joined the club as First Team Manager, explains what he gets up to on a weekly basis in his role and what the best and worst part of his job are.

“I deal with all the logistics of the rugby department on a day to day basis, the role is quite different in and out of season with a lot more to do throughout May-June,” said Gulliver.

“My main priority in May is to get everyone’s kit sizes and collate/add to a spreadsheet and send that off to the kit supplier for manufacture so its delivered before the start of pre-season training.

“All the kit is personalised to each individual so can be difficult with new player signings holding the process up.

“Once that’s done its onto getting the transport sorted for the upcoming season, this year we require a van to take the kit/equipment to away matches in advance and make the teams arrival more seamless, plus a team coach up to the specification that we require.”

With the Blue and White’s return to the Greene King IPA Championship, Gulliver furthers his explanation of how preparation is key to the success off the pitch which aids success on it.

Gulliver continued: “After that its finding the right hotels and booking for the two away overnight trips, once all this is done it will probably be the start of pre-season training, I then attend all sessions with my assistants Ron Kempin and Brian King.

“We make sure the coaches have all the equipment they require for each session. I will then start processing player registrations with the help of Graham Bayliss.”

“On a match day I make sure everything is set up for the players, so the day runs smoothly, and they hopefully have nothing to worry about apart from going out onto the pitch and performing.

“I also do all the replacement cards during the match and then post-match sign off match sheet and check all kit and equipment is in with Ron and Brian.”

Having represented Coventry Rugby’s first team on the pitch 381 times, the towering forward still loves being part of the club that he joined as a teenager, with his career spanning to 15 seasons.

“Best part of the job is still being involved with the club I love and have always loved and getting paid to do it,” said Gulliver.

“You can’t beat the honour of pulling on the Blue and White shirt of my home City club but being the First Team Manager is the next best thing.

“It’s great being around the players and being able to put the point across to them what it means to play for this Club and its great supporters, they really are the lucky ones.

“people in the crowd would give almost anything to pull on that shirt on a Saturday afternoon, it’s a very special club.”

Despite the glamorous parts of the job at Butts Park Arena, Gulliver admits that there are parts he would rather not have to do.

He said: “The worst part is definitely collating the kit order, it really is a nightmare. I have to email everyone for their sizes.

“There were 76 sets of varying garment quantities this season as there is a player pack, development player pack, management pack (physios need different garments) awaiting responses, printing emails, transferring to spreadsheet, double check, triple check and send to manufacturers requesting a quick turnaround and then chasing up on a regular basis.”

Gulliver re-joined Coventry in May 2016 when Rowland Winter arrived at Butts Park Arena but recalls when he first joined as First Team Manager when Mike Umaga was DoR and remembers being in a local Homebase when he received the call.

“I was coming out of Homebase in Coventry one Monday morning and an unknown number came up on my phone.

“I answered, and it was Keith Fairbrother, but I told him ‘I think you’ve got the wrong Gulliver’ (my son Ben was playing for Coventry at the time). But Keith continued and said the call was for me, ‘do you fancy being Team Manager? come in for a chat with Mike”.

“We had a chat, I liked what I heard and started immediately, fair play they both wanted Coventry lads involved.

“As for the Team Managers role in my experience it’s never the same, you have to adapt to each Rugby Director and what they require you to do.

“When Rowland started a job advert was put out there, I saw it and applied, got interviewed and got the job.

“I have to say it’s great to be back at the Club doing what I love, the vision here at the moment is infectious.”