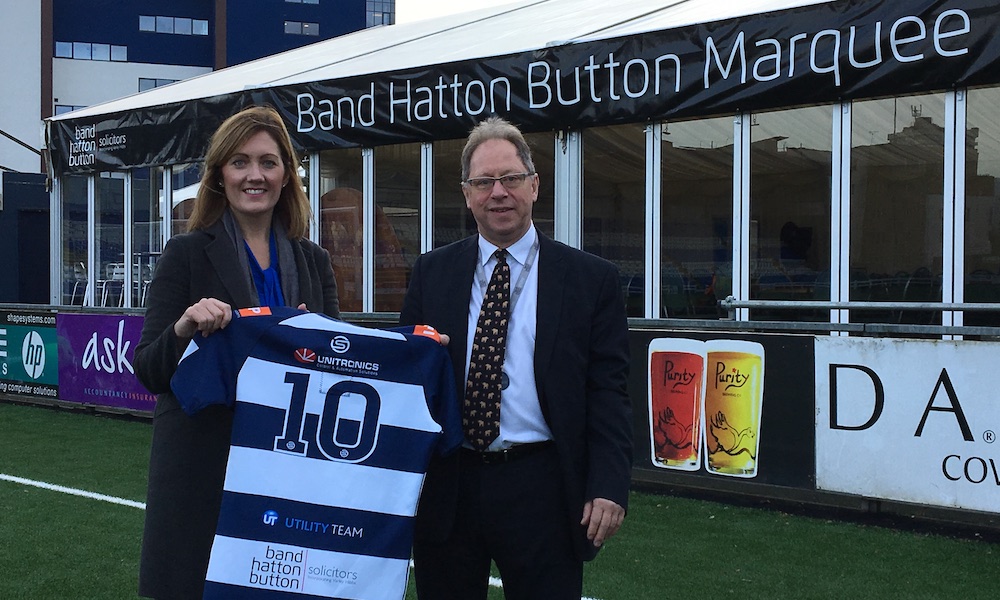 Band Hatton Button has extended its partnership with Coventry Rugby by taking the naming rights for the club’s new marquee at the Railway End of Butts Park Arena.

The marquee has become a busy feature of Butts Park Arena since it was installed at the start of the season, with both match day hospitality and midweek community programmes such as Project:500 making it a well-used area of the stadium site.

Band Hatton Button is also one of Coventry Rugby’s shirt partners, with their logo being carried on the team’s home and away shirts, and Sarah Jordan, Head of Marketing and Client Relations, says that it was an easy decision to add the marquee’s naming rights to the company’s portfolio with the club.

“It has been fantastic to have seen all of the good things that have been happening at the club so far this season,” she commented. “The team has been doing well in the Greene King IPA Championship and Championship Cup, and it seems that every night we see the floodlights turned on with community teams and schools using the new pitch.

“The marquee has quickly become a focal point for Butts Park Arena, and we’re delighted to have our brand associated with it. We’re also looking forward to our charity quiz night in the marquee in February.”

“We’ve got a superb relationship with Nick, Sarah and the rest of the team at Band Hatton Button, and it’s very pleasing to see them extend their partnership to include the marquee,” he commented. “It has quickly become an important and popular feature at Butts Park Arena and will now give Band Hatton Button increased brand exposure as well.”

If you are interested in hiring the Band Hatton Button Marquee for your dinner or event then contact Dyan Hewett via dhewett@coventryrugby.co.uk