Anthony’s putting down a marker

AFTER the frustrations of a delayed start to his Coventry Rugby career, Tongan powerhouse Anthony Matoto is now firmly in the groove and making his mark on National League One defences with five tries in his first six games.

The haul includes a double of clinical finishes on the wing in last week’s 38-14 win over Caldy, although the 30-year-old Sevens international is not one for individual plaudits.

“I’d always say my tries are team tries, I don’t take any credit for them – it’s just finishing off what the whole team started,” said Matoto, who played in Cov’s pre-season but then missed the first four league games while waiting for visa clearance.

“It’s so far, so good for me and I think I’ve finally landed on both feet now,” he said. “It was annoying that it took a while to get the paperwork and all sorts done, but I’m glad it was all sorted out in the end and I’ve made it back into the team.

“I’m enjoying it, and it’s even more rewarding when after every battle it’s always been a victory.”

Matoto has been featuring on the right wing for Cov, but has also acted as a replacement in the back row which is where he played when he started his career. “I grew up playing as a flanker, at 8 as well, and I’ve always enjoyed the part of being a forward,” he said.

“The first contact part, running on to the ball, it’s the most important part of the game where you lay the foundation for every play.

“I think my quickness started to show and some coaches thought, hey, we’ll try you at centre. All I did was crash up, set the ball and set the platform, and get the defence on the back foot. But for me, it was, okay, whatever the coach says, whatever contribution I can bring for the team, at the end of the day I’m happy to do it.

“I don’t mind the wing, but I do get bored some times to be honest so I start tracking in and getting involved with the forwards, my adrenalin’s pumping, and then I hear someone calling me to ‘get out, stay wide’, but again, it’s all for the team and I’ll do my part and, hopefully, it helps.”

After playing for Tonga Under-18s, Matoto was awarded a scholarship to go to New Zealand, at the age of18, to study and play rugby where his career continued at the Massey club and for North Harbour, leading to a place in the Tonga 7s squad and then selection for Tonga A.

“I played a couple of games with Tonga A and just recently I was in the full Tonga squad for their end-of-year tour,” he said. “Unfortunately I didn’t get a cap, there was a lot of competition, but it was just a good experience to be a part of it”

Matoto came to Cov after three seasons playing in Spain and admits he needed a nudge to make the move away.

“I was quite settled in Spain, I was accustomed to the lifestyle and everything, but my partner wanted me to challenge myself to be better because I was getting to the point where I was comfortable with my rugby.

“People feared me when I was running, so it was like, okay, you need to go somewhere where people want to tackle you, want to smash you. I said that’s a challenge I’ll take, so she pushed me and said we’ll take a mini leap of faith, two hours away, and see how it goes.

“I was talking to Rowland Winter last October, someone in Spain who had been keeping track of my games told one of the player-coaches that there was this big Tongan guy running all over the place who’d be perfect for your team. I think he passed on my footage to Rowland who was quite impressed, and as soon as I got the offer, my partner just said, yes, we need to do it.”

Apart from the weather – “I’m getting my first taste of a really cold, rainy UK winter!” – Matoto says the physicality of the game here is a noticeable difference from Spain.

“Most of the boys are my size here, but back in Spain I’m considered huge in the back line. The league there is building up, and it’s getting better and better because of a lot of funding, and most of the players I was competing against are from New Zealand, South Africa and Argentina, playing there in their off-season, seven or eight in a team, and the rest are locals. Here it’s a battle for me against 15 others and not the seven or eight.

“The rugby here is not as quick as I’ve played, in New Zealand every forward has to play like a back at some point and you’re taught with the emphasis on footwork, no t-boning into contact, run that line, whereas here it’s you’re a forward, it’s just run direct and full-on contact.

“Guys are just going to run straight into you, we Islanders love a good smash-up, so if they’re going to come running at you, even better!

“I kind of feel sorry for our forwards, to be honest. If I was a forward here I’d be exhausted at the end of a game with the work they do and the emphasis there is on driving the maul and the scrum, hitting a ruck and then hitting another ruck, and if the backs spoil a ball when attacking, it’s okay, but if the forwards spoil the ball, the world closes in in them.

“We backs get the credit for the tries, but if those boys didn’t push the scrum we wouldn’t get the scores.”

“It’s really great – it’s a great community of people and the support from the fans is amazing. It’s one of the biggest crowds I’ve ever seen and day in, day out they’re just around the club, even watching us train.

“I’m a shy person, and when post-game everyone is saying ‘good game, well played’ I’m just like, ‘thanks, I could do better’ and keep walking with my head down. I’m not used to being awarded compliments, but I can tell from it that the supporters are 100 per cent behind the team which is great.”

If things continue the way they are, chances are he will need to get used to a lot more adulation. 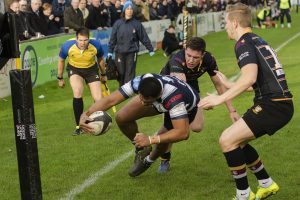 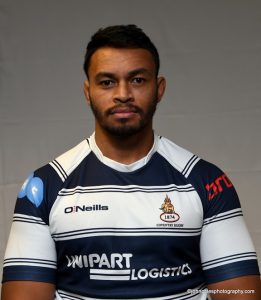