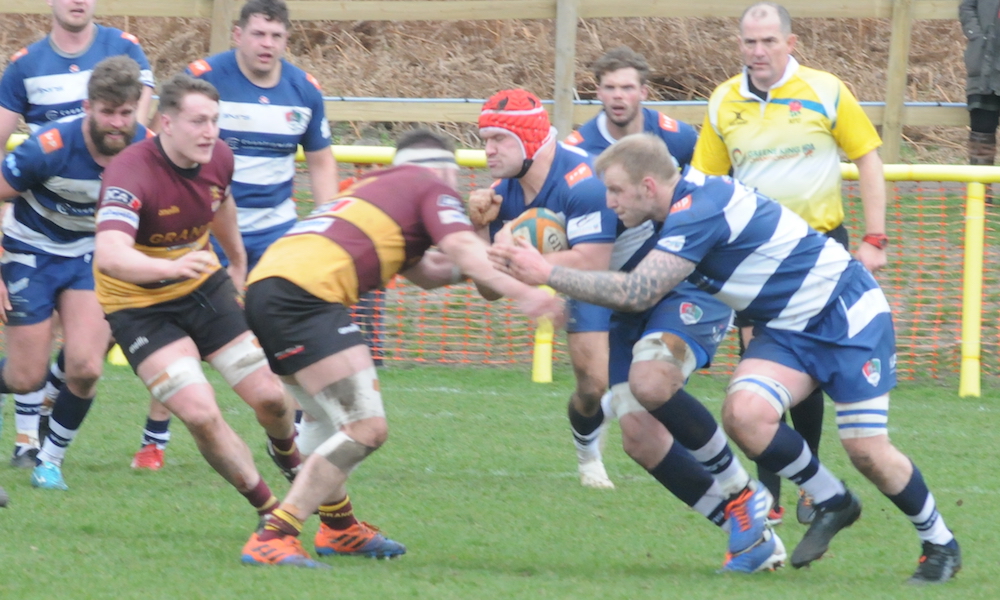 Louis Grimoldby was Ampthill’s main man as the Greene King IPA Championship new boys showed why they should be taken seriously going into 2020.

The fly half’s 100 percent record from the tee was eye catching enough in itself, but more importantly was the timing of his kicks. His conversion of Syd Blackmore’s try brought the first half to an end with Ampthill trailing by a mere two points, with a pair of penalties inside a couple of minutes around the hour mark putting his team four points ahead and forcing Coventry to go for a try.

And while the visitors – helped by a two-man advantage following a pair of Ampthill yellow cards – did cross the whitewash to go in front, the lead was a slender one point, meaning that when Grimoldby held his nerve with the final kick of the game it was the mid-Bedfordshire team who were celebrating.

Outscoring the hosts three tries to one was scant consolation for Cov, who came flying out of the blocks to hit the lead with a score from the top drawer. Joe Buckle and James Voss combined to put Cov onto the front foot, and with one offload after another from forwards and backs Andy Bulumakau was sent over in the right corner.

With the wind at its strongest it was little surprise to see Tony Fenner’s conversion be blown wide, as was an early penalty attempt. Fenner’s next shot was considerably more straightforward, Max Trimble dotting down between the sticks after a timely interception.

But it was what preceded the winger’s effort which would go on to be the story of the match, as Ampthill held out a pair of strong Cov attacks to prevent the visitors crossing.

Ryan Burrows was denied by a last-gasp Spencer Sutherland tackle on the line at the end of a passage of play which had seen Cov look to stretch Ampthill while playing with an advantage. Then a few minutes later Ampthill’s defence earned themselves a penalty close to the line, frustrating the travellers in the process.

There was also a Blackmore strip of Ben Nutley, the back rower having hit a great line off Burrows to break into the 22, and for all this effort Cov just could not shake Ampthill loose.

Playing into the wind the hosts kept things simple, coming around the corner, making metre by metre in the process. Predictable it may have been, but the tactic was also effective, no more so than when Blackmore crashed over at the end of the first 40 minutes.

The second half began brightly for Cov, who started with some strong attacking momentum, running hard, clearing out and finding the supporting runners well. Penalties were kicked to touch and while the driving game was solid so too was the Ampthill defence.

The hosts’ work on the back foot was rewarded by Grimoldby’s two penalties in the 60th and 64th minutes. Now trailing 12-16 Coventry upped their efforts, with Burrows held up over the line.

Cov were piling on the pressure, which paid dividend firstly with Facundo Dominguez and Serafin Bordoli being sent to the sin bin and then James Gibbons capitalising on the space to go over for try number three.

With 10 minutes to play there was plenty of time to go for the bonus point, which Coventry did with vim and vigour. Once again Ampthill did not break, so when Cov were awarded a scrum with less than a minute to go it seemed that the visitors would have to settle for just the four points.

But the home eight, who had been under the cosh in many of the scrums so far, put one massive effort in to win a penalty. This was kicked to touch, and when another infringement handed Grimoldby one final chance he took it with both hands.