A shot in the arm, says Phil

CLUB captain Phil Boulton believes Coventry are moving in the right direction after last weekend’s trip to Jersey and says morale in the squad is high.

The tight head prop was largely pleased with the side’s performance in their 26-17 defeat by Championship hosts Jersey Reds while conceding that the final outcome was disappointing.

“I was really happy with things in parts and not so happy with other parts,” said Boulton (pictured) 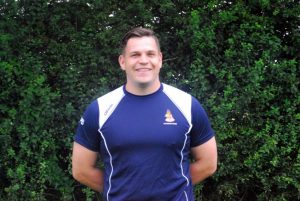 , who captained the side.

“We’re looking for perfection I suppose, which is a long way from where we were, but it was a definite shot in the arm for us – it showed we’ve had a good pre-season, and although we’re disappointed with the result, we’re happy to have competed against a very good Championship team.

“We finished the stronger side, and I think that again comes down to our pre-season, to the players we’ve got and to the trust we’re getting within the squad along with the competition that we’ve got for places.

“The boys coming off the bench know that they’ve got to raise, or at least equal, whatever the boys who are starting are doing and also do justice to the lads who missed out and stayed at home because there is so much competition.

“There were a lot of substitutions going on, but that’s what pre-season is all about, trying out different combinations and players and just seeing how things go. There wasn’t any drop in our level at all which is definitely pleasing.

“It’s been difficult to find anything negative about the group at the moment.

“We haven’t had a lot of tests in pre-season in terms of the selection around the three fixtures so far, we all know that everyone is getting a chance and are happy with that.

“Everyone has been positive with it, helpful to one another and enjoying each other’s company which is the main thing.”

Cov suffered from a high number of penalties conceded in the first half, but Boulton insists it is not a cause for concern.

”I think the good thing about the penalties was that they were for over-eagerness rather from being cynical or someone definitely trying to cheat – boys were literally wanting to do the right thing and perhaps were not in the condition or the right place at the right time to do that.

“A couple were given under the new Laws, so we’ll look at that and address it within the squad, but I don’t think we need to hit the panic button over the penalties just yet.

“It was a classic pre-season fixture for both teams ad there were probably 20 points left out there between the two teams.

“I spoke to Harvey Biljen, Jersey’s coach, and he was very impressed and said the game probably warranted a Championship fixture. It wasn’t too far away from where he felt they need to be going into a Championship game.

“We’re disappointed not to have won it because in the end we left a lot of chances out there. Maybe that’s down to match fitness, rustiness or just a bit of sharpness, but the chances were there and I think the coaches were relatively happy with that.”