COVENTRY Rugby is delighted to welcome international duo Alex Grove and Jack Preece as its first new signings for next season.

The pair will bring a wealth of experience to Butts Park and, currently playing for Cov’s neighbours and National League One rivals Birmingham Moseley, are excited at the prospect of being a part of the club’s future plans.

Grove, 29, who made one try-scoring appearance for Cov in the 2008-09 season when on loan from Worcester Academy, was capped by Scotland at under-18, under-19, under-20 and A levels before winning three full caps at centre, while 27-year-old Preece has figured in the England 7s squad and also played for England Counties.

“Alex and Jack are great additions,” said director of rugby, Rowland Winter. “Both are ambitious and are keen to be part of an ambitious club.

“Both players have strong leadership qualities and they have consistently impressed throughout the season for Moseley.

“Jack is a tough and skilful player who can also cover hooker, and he has been one of the stand out performers at 7 in the league this season.

“Alex is a creative and clever midfielder who has impressed week in, week out this season. He will add plenty of experience to our team on and off the pitch.

“We look forward to welcoming them both into the squad.”

Grove, who has signed a two-year contract, made 152 appearances for Worcester Warriors in ten seasons at Sixways, which also included a six-month loan spell at Edinburgh, before joining Birmingham Moseley last summer.

Preece, who is on a one-year deal, played 104 games in five seasons at Birmingham & Solihull, captaining them in 2011-12, and was awarded the double accolade of players’ player and supporters’ player of the year in consecutive seasons.

He then spent three seasons at Rotherham Titans, making 71 appearances, and – also in his first season at Birmingham Moseley – has twice been named in the Championship Dream Team of the Year as an open side.

Cov plan to announce up to six new signings over the next few weeks, all players with a proven Championship pedigree, while intending to retain some 80 per cent of the current squad as they build on the progress made on and off the pitch this season. 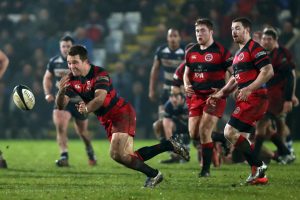 Alex Grove in action against Coventry earlier this season 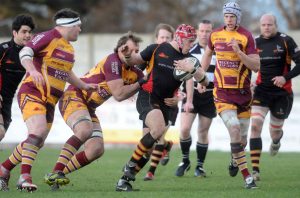 Jack Preece on the charge