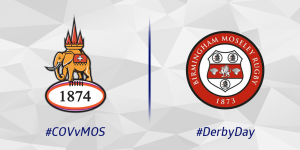 Coventry Rugby have named their 32-man squad to face Birmingham Moseley in the Harry Walker Memorial match at Butts Park Arena on Saturday.

The Blue and Whites will boast many new faces in their matchday squad for this pre-season fixture which is being played in the memory of the late great Harry Walker. The game will be contested as a normal 80 minute match.

Walker sadly passed away at the grand age of 103 in June and was the oldest surviving England Rugby international, he was adored by all at Coventry Rugby and held a strong presence at the club over the years.

The Blue and Whites enjoyed two colossal victories over their near rivals last season in the title-winning season in National League One.

First an emphatic 50-11 victory at Butts Park Arena on the second game of the season, the Blue and white’s ran in eight tries to secure a huge start to the league campaign.

Coventry then completed the double in similar fashion with a 41-17 win at Billesley Common, scoring seven times over the whitewash.