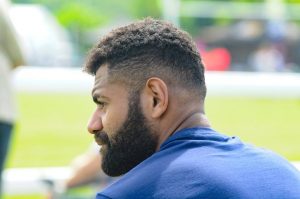 In 2017 Junior joined younger brother Andy at Castle Park with Championship outfit Doncaster Knights ahead of the 2016/17 season.

Junior has since represented Coventry in the 2018 Olney 7’s Sports Punk Open where the Nighthawks were victorious in winning the title.

Where did You start playing rugby: Fiji

Career highlight to date: Getting my first cap for Scotland 7s in New Zealand.

Why did you join Coventry: To play free flowing rugby and play with an ambitious team.

What are you most looking forward to at Coventry: My first run out at Butts Park and meeting all the fans.

Tell me something interesting about yourself: Before I joined the Army I weighed 22 stone.

If you weren’t playing rugby, what would you be doing: I’m still a soldier in the British Army. Fortunately, they allow me time off to pursue my rugby career too. So I’d be a full time soldier.

Do you follow any other sports: Football and Basketball.

Favourite all time player: My Dad! He played 7’s for Fiji and the British Army

Jonny Wilkinson or Dan Carter and why: Dan Carter! I’ve always been inspired by the way he plays since watching him play for the Crusaders when I was young.