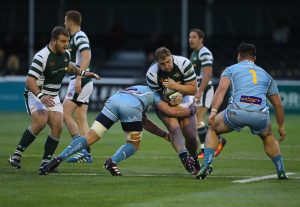 Gibbons played football until he was 14 and was part of Leicester City’s Academy before making a wise switch to rugby union.

The 24-year-old played for Hartpury College and gained valuable experience on loan at London Scottish while with Gloucester’s Academy before joining Ealing Trailfinders, where he has played 41 games over two seasons.

Having already experienced the brutality of the GK IPA Championship, Gibbons adds quality to an already assertive front-row, and we look forward to having the hard-hitting prop in Blue and White this season.

Place of Birth: Burton Upon Trent

Where did you start playing rugby: Burton Rugby

Why did you join Coventry: It is an ambitious club, with a very good coaching set up.

What are you most looking forward to at Coventry: Getting to know all the lads and seeing how we develop as a team throughout the season. And I’m excited about playing in front of a lot of loyal fans.

Tell me something interesting about yourself the fans would like: I can do the worm backwards.

If you weren’t playing rugby, what would you be doing: An accountant because I’m pretty decent with numbers if that didn’t work out I’d be a competitive eater!

Do you follow any other sports: I enjoy all sports, I’m a Leicester City football fan

Favourite music artist/band: I like all kinds of music, I went to watch Coldplay live last year and they were class. So probably them.