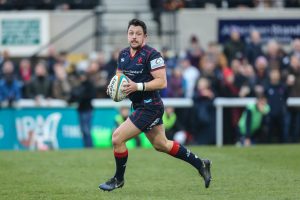 The wise fly-half has a generous amount of Championship experience with his former club, London Scottish, and Bedford Blues, whilst also experiencing Premiership Rugby with Saracens.

The former England Under-20s half-back, Sharp started his senior career with Saracens and played for Bedford Blues on dual registration before making a permanent switch and made 188 appearances.

The 27-year-old was named in the 2015-16 Championship Dream Team and spent last season at London Scottish as a player-coach, making 20 appearances, he now joins Coventry Rugby in the same capacity.

Where did you start playing rugby: Saracens Amateurs

Why did you join Coventry: A club that has a vision to be extremely successful. Brilliant for me to keep playing at a high level whilst learning of some experienced coaches.

What are you most looking forward to at Coventry: Meeting the fans and pulling on the shirt for the 1st time

Tell me something interesting about yourself the fans would like: Recently became a father for the 1st time

If you weren’t playing rugby, what would you be doing: Coaching

Do you follow any other sports: Take an interest in most sports, spend a lot of time on sky sports news.