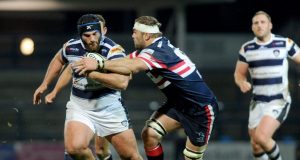 New front row Charlie Beech began his senior career at Northampton Saints Academy, he went on to represent England at Under-19 and Under-20 levels, before gaining Premiership experience at Waspsand Bath.

The 30-year-old signed for Yorkshire Carnegie on a loan deal initially in the 2013-14 season before he made the move a permanent one the following season. The powerful front-row has gone on to make 90-plus appearances for the Leeds-based side.

We look forward to seeing Beech front up against our challenges in the Greene King IPA Championship this season.

Where did You start play rugby: Biggleswade

Career highlight to date: Scoring a try in a playoff semi-final

Why did you join Coventry: It’s a very exciting club to be a part of

What are you most looking forward to at Coventry: Being with Phil Nilsen again…

Tell me something interesting about yourself the fans would like: Just starting up a women’s team in Wetherby

If you weren’t playing rugby, what would you be doing: Cooking

Jonny Wilkinson or Dan Carter and why: Wilkinson because he kicked THAT drop goal