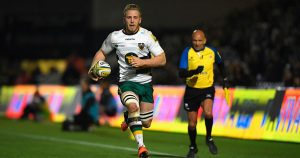 Get to know Ben Nutley, who joins Coventry Rugby from Northampton Saints.

Firstly, a very warm welcome to Coventry and Butts Park Arena to Ben, who was part of Northampton Saints’ double-title winning season in 2014.

The 26-year-old has progressed through Saints’ Academy and made 83 appearances for Northampton’s first-team in the Premiership, Anglo-Welsh Cup, A League and European Rugby.

Nutley has represented England at Under-19’s and Under-20 levels, and his most recent triumph was winning back-to-back A League titles back in May this year.

We are excited to seeing Nutley in the Blue and White of Coventry Rugby in the GK IPA Championship next season.

Where did you start playing rugby: Stockwood Park RFC

Why did you join Coventry: To join a club that has a strong vision of being at the top, to play a lot of rugby with a top group of lads and of course to enjoy my rugby!

What are you most looking forward to at Coventry: Hopefully playing week in, week out and developing as a player under the coaches.

Tell me something interesting about yourself the fans would like: I have an identical twin, good luck telling the difference when he comes and watches.

If you weren’t playing rugby, what would you be doing: Probably something within sport, maybe teaching or coaching as I enjoy helping people to develop and get better. Though I am starting in sales so let’s see how that goes.

Do you follow any other sports: I’m a big football fan and have always followed Liverpool.

Jonny Wilkinson or Dan Carter and why: